Brown Recluse Spiders are the Devil

I know you have probably heard of the very dangerous Brown Recluse.  But, do you know how dangerous they actually are? Do you know someone who has been bitten or seen the horrible damage they do?

Back in December, a few weeks before Christmas, our furry son-Diesel was bitten by a brown recluse.

We just thought he was sick.  He seemed tired and didn't want to play, which wasn't like him at all.  Then he just laid on his bed all night.  The next day I was scheduled for a minor dental surgery.  Hubby was to take me to the surgery, then bring me home.  Instead, he ended up getting my dad to help load Diesel into his truck and my mom took me to the dentist.

When they picked Diesel up off his bed, my dad and hubby noticed a tiny spot of blood on the sheet.  They sped to the animal hospital and got him admitted.  Hubby told the vet his symptoms and they checked his chest where the blood seemed to be coming from.  After a brief exam, the vet shaved his chest.  Hubby said "it looked like a deer that had been shot with a shotgun".  It was swollen, and solid black.  The vet knew immediately that it was either a rattlesnake bite or a brown recluse.  The venom does the same type damage. 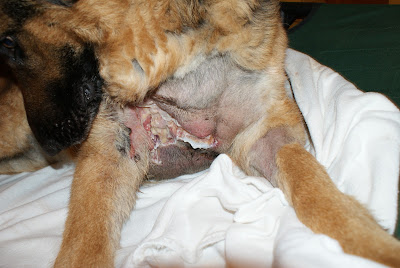 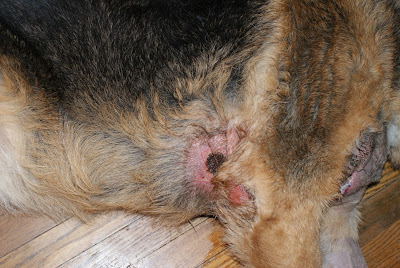 Because Diesel lives in the house with us, and Terminix had been to our house two days before the incident, we feel that they got the spiders stirred up. Our house is 85 years old, and rock (which spiders love). 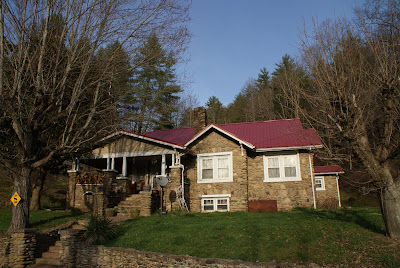 After nine days in the animal hospital, and me recovering from dental surgery, we got to bring Diesel home. It's amazing that he even survived his spider attack.  He was bitten at least seven times.  Once he was home, he had to wear an E-Collar so that he wouldn't chew at his wounds.  We put the collar on him the first time and he knocked with his foot it off immediately.  After We put it back on and told him to "leave it", he hasn't tried to remove it since.

A month after his spider incident he began to improve.  These are photos from one month post spider bite: 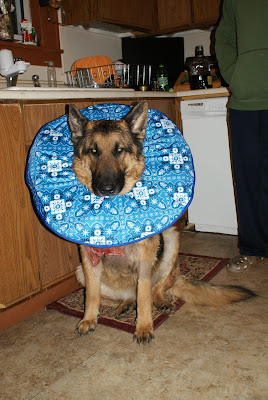 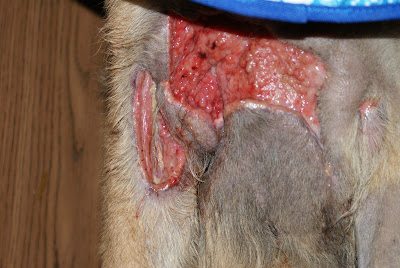 He has continued to wear the collar for the last 3 1/2 months and looks like a dog that belongs in the circus.  He takes his antibiotics like a champ and lets us rub him or soak his wounds with Epson Salt and peroxide.  We also spray him with antibiotic spray.  He has continued to improve but none of us can wait until the day his huge collar comes off.
After all this time, these are photos from today.  Still not completely healed, but better than ever.  We spent over $3,000 in vet bills, but we love him like never before. 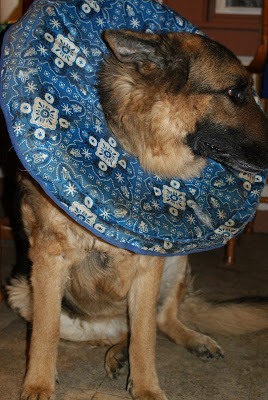 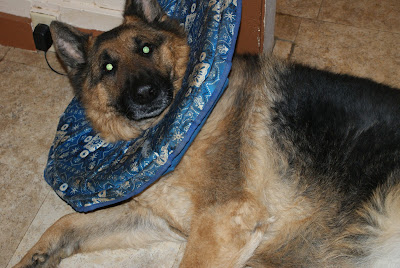 He feel so much better he didn't even want to pose for photos, he only wanted a belly rub.
Please keep him in your prayers.  Even though we have sprayed the house 3x and had the outside treated, we don't know where or how he was bitten by the devil spider.  I am scared for him, and for us because it had to have happened in the house.
Please watch out for your furry babies and know that no matter how much you love and care for them, freak accidents can and will happen when you least expect it.  This is a warning for everyone who has pets.
﻿
﻿For a GREAT Giveaway, check out Mrs-Adventure!
Posted by Unknown at 11:47 PM

Email ThisBlogThis!Share to TwitterShare to FacebookShare to Pinterest
Labels: Doggies

Oh my this is awful girlee. We have them here in Texas as well as Black Widows. I can't believe the damage it did is such a short time.. I'm forwarding this email to hubs asap.

Oh, I hope that your dog becomes well soon...