This weekend we accomplished SO many things!

But first, I want to give a shout out to my dad!  HAPPY BIRTHDAY!!  Love you (not that you will ever read this.)

Friday night I made him his favorite birthday cake.  It's a coconut cake, made with sour cream, lots of sugar, coconut milk, frozen fresh coconut, whipped cream, etc.  Then you bake it up nice.  Slice two round pans into four slices and layer it up with the mixture.  Frost with whipped cream and left over sour cream mixture.  And leave it in the fridge for 3 days.  I toasted some regular coconut (not the frozen) and sprinkled it on top.  I am so glad he is getting this cake this afternoon.  It's all I could do all weekend to not eat it. mmmmm......

If anyone wants the official recipe, just email me. It is heavenly. 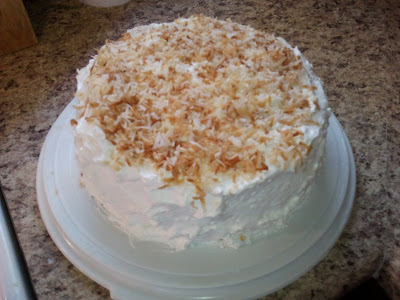 Next, I made a new sign for my kitchen! I used a piece of left over lumber and sanded it down a little.  Then went to town painting.  I tried using stencils and spray paint (made a big mess) then finished it by just hand painting.  I still need to 'rough it up' a little bit with some sandpaper but, this give you the general idea.

Not perfect, but I like it.  Then hubby goes..."Where's my name?"  I told him this was my kitchen.  I would put his name on another place in the house. 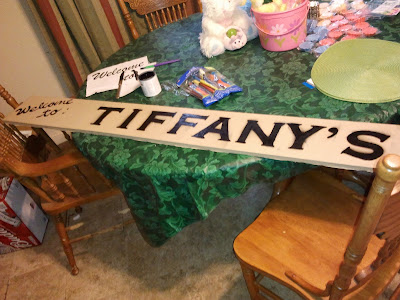 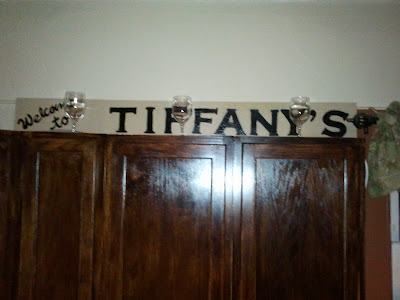 While I was home painting signs, hubby decided to go turkey hunting.  He was gone maybe an hour when he came home with this!  ﻿ 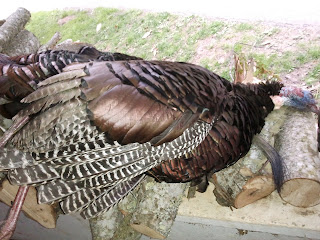 Its huge!  It weighed over 25lbs!
I was shocked he killed a turkey, and in that short amount of time.  Not to mention it was a huge, beautiful bird.  After we eat it he is going to have it mounted.  Not sure where he thinks he is going to put a big turkey in our house, but most likely upstairs in his "hunting room" where I am going to put his sign.  ﻿
On Sunday we moved a dog house that use to be in another area in the yard.  It was built up on 4x4 posts.  Hubby had to pull it out of the ground with the four wheeler.  After a terrible paint job, I was able to move my little bluetick Jill into a pen beside her hunting buddy Scout.  I wanted to free up the pen she was in so that Diesel could spend some time outside  this summer while we are at work rather than lay in the floor all day waiting for us to come home. 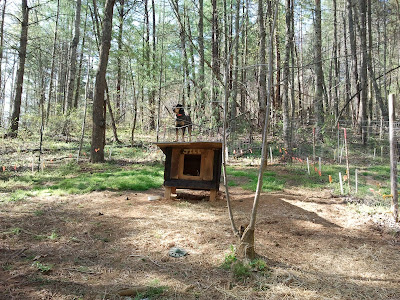 Jill in her new pen 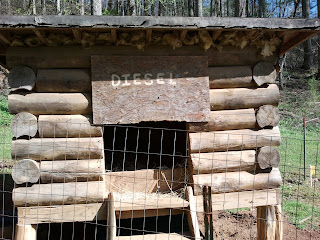 Diesel taking over the big house 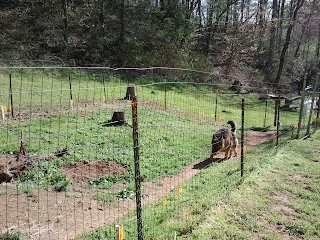 Diesel checking out his new lot.  He can enjoy the nice weather all day instead of the kitchen floor.
Hubby also plowed our garden twice to get it ready for planting.  I'm all excited about the things I am going to grow.  And my dad brought me these from work.  I have BIG plans!  Stay tuned : ) 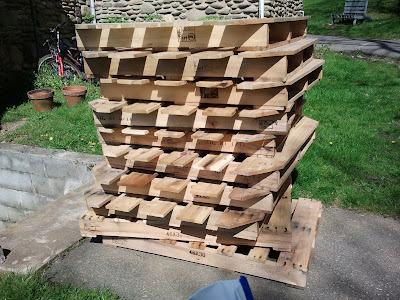 Email ThisBlogThis!Share to TwitterShare to FacebookShare to Pinterest
Labels: Crafts and Projects, Rambling

Y'all have been busy! That turkey is massive! And Diesel looks thrilled to be outside :)

Oh, you asked me about my workout clothes- I got them at T.J.Maxx. It was around $12 for a pair of shorts, $8-12 a shirt, and $10 per sports bra, which is about half of retail value. The stuff I got was all Nike or other brand names (champion, new balance, etc.)