Seriously? All in One Day...Seriously??

I'm feeling two posts coming on today so be prepared.  Hopefully this one will be the only ranting one.

But, what else could go wrong in one day (I should probably never ask that question)?

First off, I'm borrowing my dad's car for awhile (long story).  The power steering has been making scrubbing noises lately so I have to add fluid every few days.  And, it has no A/C.  It was around 90 degrees here yesterday (at least 100 in the sweltering car).  After I had driven about 10 miles, I looked down to see that I was going 0-mph.  I freaked out and called hubby to ask him if the car was safe to drive/could be connected to power steering, etc.  He said "what choice do you have, I think it's fine."  So, I kept going.  After about 5 more miles I look down and the switch FLEW from 0 to 95!  At the same time I was getting passed by an 85 year old woman in a minivan.  I was NOT going 95.  They gauge stayed on 95 until I reached the office.
I parked under a nice shady tree hoping the car would be cooler when my appt. was over.  I rolled each window down about 1 1/2 inches.  I got out of the car and the entire back of my shirt was dripping with sweat.  It was green so it just looked soaking wet.  Not to mention the rest of me. Make-up smeared all over my face, you get the picture.  All the while looking forward to telling them the great news once I got inside.  Thank God for me my doctor is super cool and told me to "Stop being silly, its no big deal".  : )  Now it's over for the year!

I leave the office and head home.  Still, hot as Haiti's-get in the car and head home.  You see, a month or so ago the drivers window stopped rolling up.  I took it to my grandfather and uncle who are mechanics.  They searched part dealers across the whole US of A and found ONE part to fix the window.  My grandfather said:  "Don't break the other side because I that's the only part like that in the world."

I got home, pulled in the driveway flying....dreaming of unlocking to door and standing naked in front of the window A/C unit for about 10 minutes.  Put the car in park, pulled the break, rolled up my window, pushed the button to roll up the passenger window, glanced over to make sure it was up-nothing.  I thought, okay....I'll reach over and use the button on the other door, must be the button....nothing.   No clicking, no rolling up.  The only thing I could think was not again!  So I went inside dripping with sweat and sat in front of the A/C totally frustrated.

Hubby got home, took the panel off and tried to fix it but couldn't. SO what do you think happened next?  That's right, this:

We had to hurry up put the panel back on the door and pull it under the carport.  I then proceeded to duct tape and wrap the door in plastic thinking I could water proof it enough to drive to work on Friday.  FORGET it.  Although I had wrapped that sucker up like a diaper on a baby it was just dripping in directly on the seat.  Then, Friday night I was waiting to turn on the news and see some crazy guy building an ark.  Finally yesterday the rain subsided, the sun came out and it was a muggy hot day.  We were able to get outside and let our dogs play in their pool.  They had a blast. 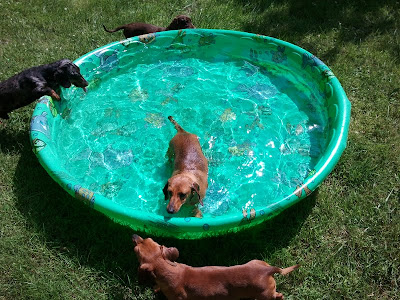 For the last few day's I've been bumming rides to and fro.  We dropped the car off at my grandfathers to see what he can do to fix the car window.  He mentioned something about "putting a stick in it to prop it up permanently".  Boy its going to be one hot summer.  ; )  As far as the speedometer, well, I've heard you can get out of a ticket that way.
Posted by Unknown at 11:07 AM

Is it ok to admit that I laughed reading this story harder than I did when you told it? Sorry for the bad luck (is that even what you call it at this point?) with the car - if I win the lotto I'll buy you a new one and we can set this one of fire :+)

I feel for you...my van is held together by fishing line and prayers...and the parts to my car apparently can only be found in the junk yard..Goof luck on getting it repaired...

Maybe you could ride your bike! HaHa

Even while using relatively low interest of 10%, individuals are still paying more to the convenience of quick cash than necessary http://pxl.co/ the baby boom is mostly defines as those born between 1946 and 1964, though many quibble with the 1964 date.

For they, low credit score payday advance may be the right financial instrument payday Loans online although this
is another temporary respite because euro may remain under pressure before madrid's lasting debt sale later soon.

What what this means is is that for those who have below ideal
credit as being a consequence of bankruptcy or another financial problem or problems, short term loans online could possibly be the best options to suit your needs no teletrack payday loans get some extra
pounds until next payday, apply instantly.
My webpage :: no teletrack payday loans

2007 annual loan volume was over $40 billion, with average interest rates of 400% APR loans until payday the board in particular recommends approval on that.