I almost shot my husbad

I am busily cleaning the house and I get a phone call from my husband.

Husband: "There is a big snake down here in the road.  Get the snake pistol and some down here with a flashlight."

(It is a pistol that fires 410 grain shot gun shell's.  Perfect handgun for shooting snakes.)

We of course were out of the shells so, I loaded my 20 gauge shotgun with skeet shells which is all I had that would fit it.  I walked down our driveway where my husband was standing.  (He is terrified of snakes just as I am spiders).  He had the snake pinned to the ground with a long stick.

Husband:  "Just walk around behind me and look at it.  It doesn't look like a normal black snake."

Me: "I'm in flip flops.  I am NOT walking around behind you or around that angry snake."

Husband: "Just walk around this way, you will be fine."

BOOOOMB!
I shot the snake.

It went flying about four feet down the road.  I made an awesome shot.  Hubby was shaking in is boots.

Husband:  "YOU ALMOST SHOT ME!  I can't believe you did that!  I think I have some shot in my leg!"

He brought the snake body back to our house where we could see it better since it was getting dark out.  It did look strange.  Not like the typical black snake.  It had brown markings like a copperhead which are very common in this area.  There are rumors that black snakes and copperheads breed making a cross breed.  We were a little concerned that this is what we had come across. 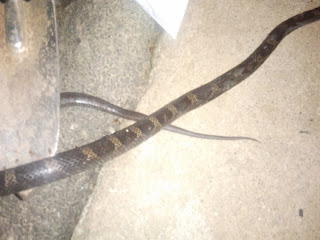 We have a building where we park our two Mustang's that is loaded with black snakes.  I would hate to think we had a deadly breed infesting it. Typically when we go get one of the cars out there are at least 2-3 black snakes that hit the floor of the building scaring us both before the crawl away.

After we took some pictures of the snake and sent them to some family/friends (a certain friend decided to scare me and say it was a rattleheadedcoppermoccasin, or something to that effect) it was actually an Eastern Corn Snake.  Which makes since because it was coming out of a cornfield onto our road.  If it hadn't struck at my husband it would still be alive, but, with all our furry children, I do not want an angry snake crawling around that close to our house.  Not to mention we have SO many more snakes. One less is not going to endanger the species I'm sure.

I had to hear all weekend about how I "almost shot him".  It was pretty funny.  At least it was comic relief after a stressful work week.

This is my second snake encounter so far this summer.  Wish me luck as we continue on with our "normal lives".

Oh goodness! I can't imagine having to watch for snakes to get my car out. You are much more brave than I am that's for sure!
Thank goodness you are a good shot. I'm sure your hubby appreciates that!

Sorry about the bad joke, at least the sucker was dead before I made it right? :o)