Dale and Thomas Popcorn sent me one a Spooktacular Halloween Gift Box to try out.  I was popping around the house like a kernel in kettle waiting on this box to arrive.  I have been a popcorn lover my entire life.  My mom and I would watch movies and eat popcorn all the time growing up. We could easily put away a bag in no time.

I guess you could say the same thing about the Spooktacular Gift Box.  I knew as soon as I opened it that it would not last more than maybe a day or two.  First of all, the box was adorable.  I love anything Halloween related so this was right up my alley. 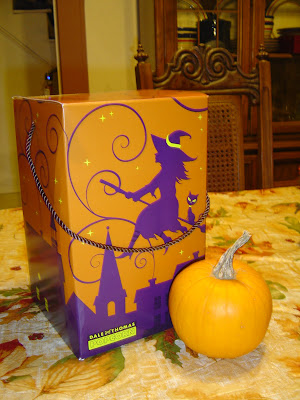 Inside the box were all these goodies: 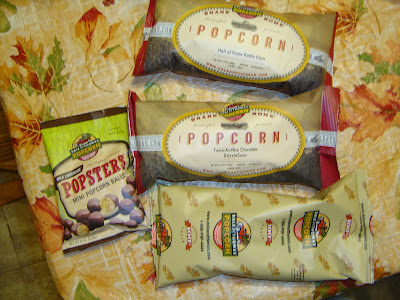 I'm not gonna lie.  The first thing I tore into were the Milk Chocolate Popsters.  What could be better than giant kernels of popcorn dipped in caramel and chocolate?  Nothing.  I ate half the bag.  I tried to save some for hubby, or later at least but, it was hard.  They were outstanding.  A sweet and salty mix gets me every time. 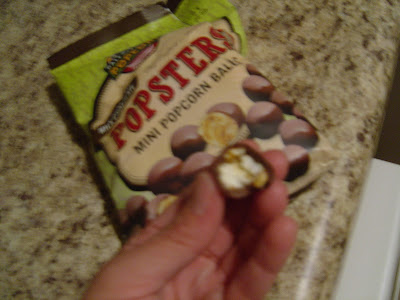 Terrible picture for such a great snack. Too busy eating to hold still.
Next on  my list was the Hall of Fame Kettle Corn.  I love Kettle Corn and we always eat it at the state fair.  This was fabulous!  Dale and Thomas have such high quality popcorn.  Their kernels are all so big and fluffy.  And, it had just the right amount of sweetness. 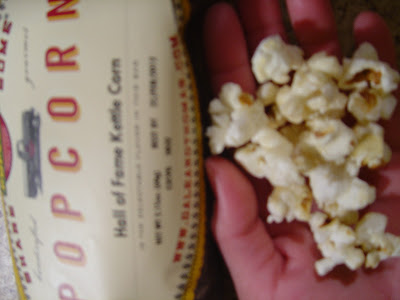 I have issues with getting up in the middle of the night and snacking.  I know...I know...its a terrible habit and my waistline is growing because of it.  But, when you've got a bag of Twice as Nice Chocolate Drizzle Corn waiting for you to try, you kind of forget the rules.  So..I went for it.  I hope their is some left when I get home.  It was Dreamy so I can't remember if I ate it all (that's going to be a nightmare).  I don't think their is a mix as good as chocolate and popcorn.  I'll take it over peas and carrots any day. 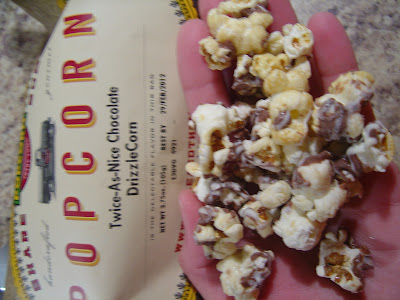 Finally, I tried the Parmesan Garlic Sticks.  As much as I love both those things, on popcorn (or sticks as they were called) I wasn't as excited about trying it.  But I did anyway..I'll try almost anything once. 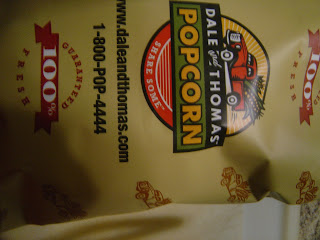 They were actually shaped like little twisty sticks rather than kernels. 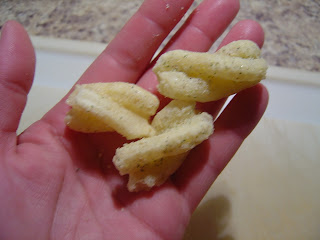 They were quite good.  I would have to be in more of the mood for them than regular popcorn but I bet they would be fabulous used as croutons or to dip in dips.  I can think of 100's of things I would just like to use them for besides eating them right out of the bag.

The Dale & Thomas Popcorn Company is SO generous they are going to give away not 1 but THREE...that's right I said THREE of these Spooktacular Halloween Gift Box's away to some lucky readers.  Just leave a comment saying which of their specialty popcorn's you want to munch on.  You can leave two additional comments if you are a blog follower!  Winners will be chosen on Tuesday, October 23rd! Good Luck!

I would love to try them out... the chocolate dipped had me at "choco" :o)

Umm how did I skip "follower 1"? We'll blame it on me ADD this time I guess.

Hey Tiff
Does your Husband like your Garlic breath?? hehee

Sorry about that, Milk Chocolate

I love popcorn. I admit, I eat a bowl almost every night. (Bad habit.) That chocolate drizzle looks amazing!

I want some of these!! They look so good!!

nice shot on the deer, hope you mount the head on your wall.