After coming home after a long day at work, hubby decided that we should go deer hunting.  I didn't really feel like it but agreed just to get out of the house and enjoy nature for a little bit.

We went to a stand on our property up behind our house.  It's bow season here in NC so I was a little nervous since I've never killed anything with my bow before and not had a lot of practice shooting it this year.

Hubby decided to hunt with me rather than separate so off we went.

It was just before dark when I see a deer coming out. I began to get that nervous feeling that only a deer hunter gets when they see the antlers coming through the trees.  It was getting so dark I thought I would surely miss.  I knew it was at least a six point buck but couldn't really tell from the distance.

Hubby kept telling me to shoot..shoot.. 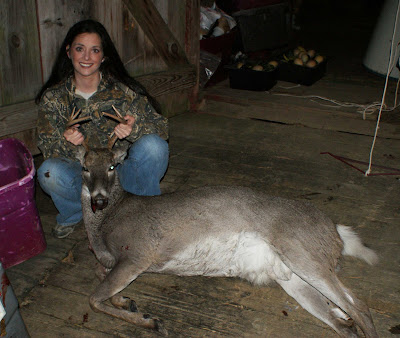 I hit it!
I always try to shoot them in the neck (I know..sounds cruel) but they die instantly.  People who shoot deer in the heart or where it is marked on targets, etc., they lie their and die slowly and quiver.  I've done it once and it broke my heart.  Hubby says I'm going to miss one day aiming for the neck because they turn their heads so fast (and I have missed a good one-once).  But, now we are restocking the freezer and I got the first deer of the season. : )
But, hubby had to stay out late in the cold and skin him.  Which took forever.  I also made him skin him so that I could have the head mounted if I wanted. 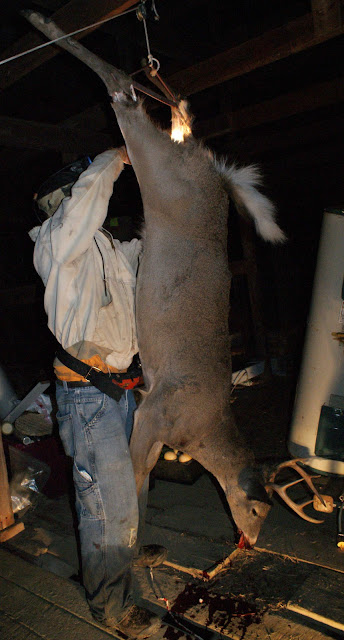 I takes longer to skin them this way (or field dress I suppose is the proper terminology).  But, he did it anyway.  Thanks honey! : ) 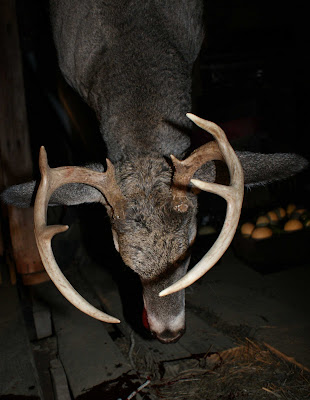 He even turned out to be an 8-point rather than a six.
Needless to say, I was pretty stoked.  We have meat for the freezer (our freezer quit last week and we lost all the meat we had).  So he was much needed.   And, it turned out he was an older buck-which made me feel better.
One more picture for bragging rights then I'll announce the winner of the E.O. Products giveaway that I'm way late on... 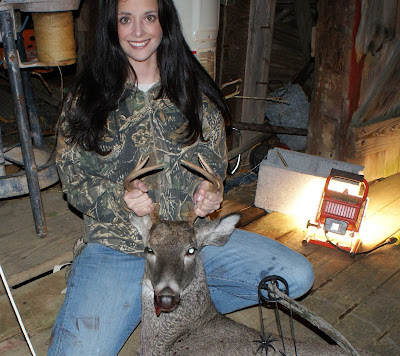 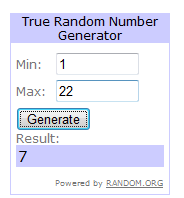 #7 Eddie!
Eddie, please contact me with your information so I can pass it along to E.O. Products and you can get your wonderful lotion and hand soap!
Everyone else, go sign up for the Dale and Thomas Popcorn giveaway! ﻿
﻿
﻿
Posted by Unknown at 4:22 PM

Awesome buck chickadee I've never hunted myself. I'm always there once hubs is ready to process though... I can skin a deer faster than he can shoot one and I know how to do it without "gutting" the animal ha ha.