It's been over 5 months since I've posted, anything.  That is the longest stretch of which I've been silent in the past two years.


Just blog silent.  Sorry for neglecting any readers who may have (but probably didn't since our attention span these days is about 5 seconds) missed me.


Basically, the past four months for me have included gardening, gardening and more gardening.  Then, after all that gardening began canning, freezing, and preserving all the glorious veggies that came from, yeah you guessed it: gardening.


We have about 100 pints of green beans, 25 quarts of pickles, 35 pints of salsa, 20 quarts of spaghetti sauce, 20 quarts of veggie soup, 15 frozen squash casseroles, 15 gallons of frozen broccoli and numerous bags of frozen corn and diced peppers (I'm sure I'm forgetting something).  Needless to say, we're ready for winter.


When I haven't been gardening or preserving, I've been cooking!  I have a ton of great new recipes that I need to share.  Some of them were so good, they are way to good NOT to share.  And easy!  If they turn out good for me, they'll be good for anyone. :)


But, more importantly...football has begun!  I'm always so sad when its over and so excited when it begins.  The next few days will be filled with research for the upcoming fantasy football draft and awaiting the beginning of real games rather than the preseason matchups.


Wish me luck for the draft.  Promise to keep posting without another 5 month lapse. :)
Posted by Unknown at 11:11 PM 0 comments

Email ThisBlogThis!Share to TwitterShare to FacebookShare to Pinterest
Links to this post
Labels: Eco-Friendly and Green, Rambling, Recipes

I've been a huge fan of Glass Dharma for a few years now and support and appreciate everything they are doing for our planet and all the people who live on it.

They are doing yet another incredible great Earth Day giveaway this year by giving away 1000 glass straws during the month of April.

After almost two years of using my Glass Dharma straws I can honestly say they are virtuously unbreakable.  I'm  pretty rough on things and have dropped mine WAY more than once but, they aren't even chipped.  They are built to last and handmade in the USA.  And, if you do happen to break one, they come with a lifetime guarantee! 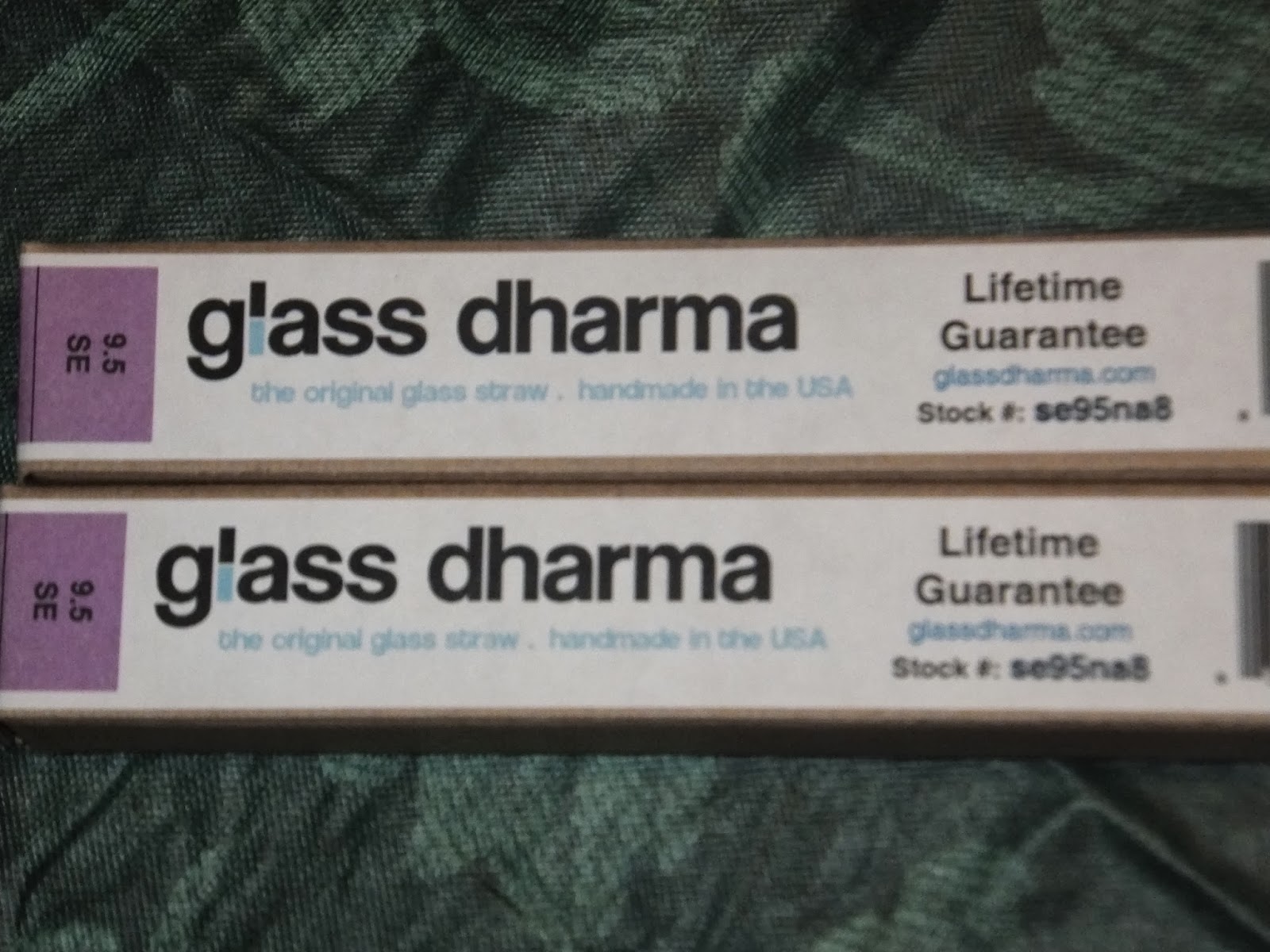 I was fortunate enough to be able to help promote their 2014 Earth Day 1000 straw giveaway and also received some new straws as well as a carrying case and I couldn't be happier! 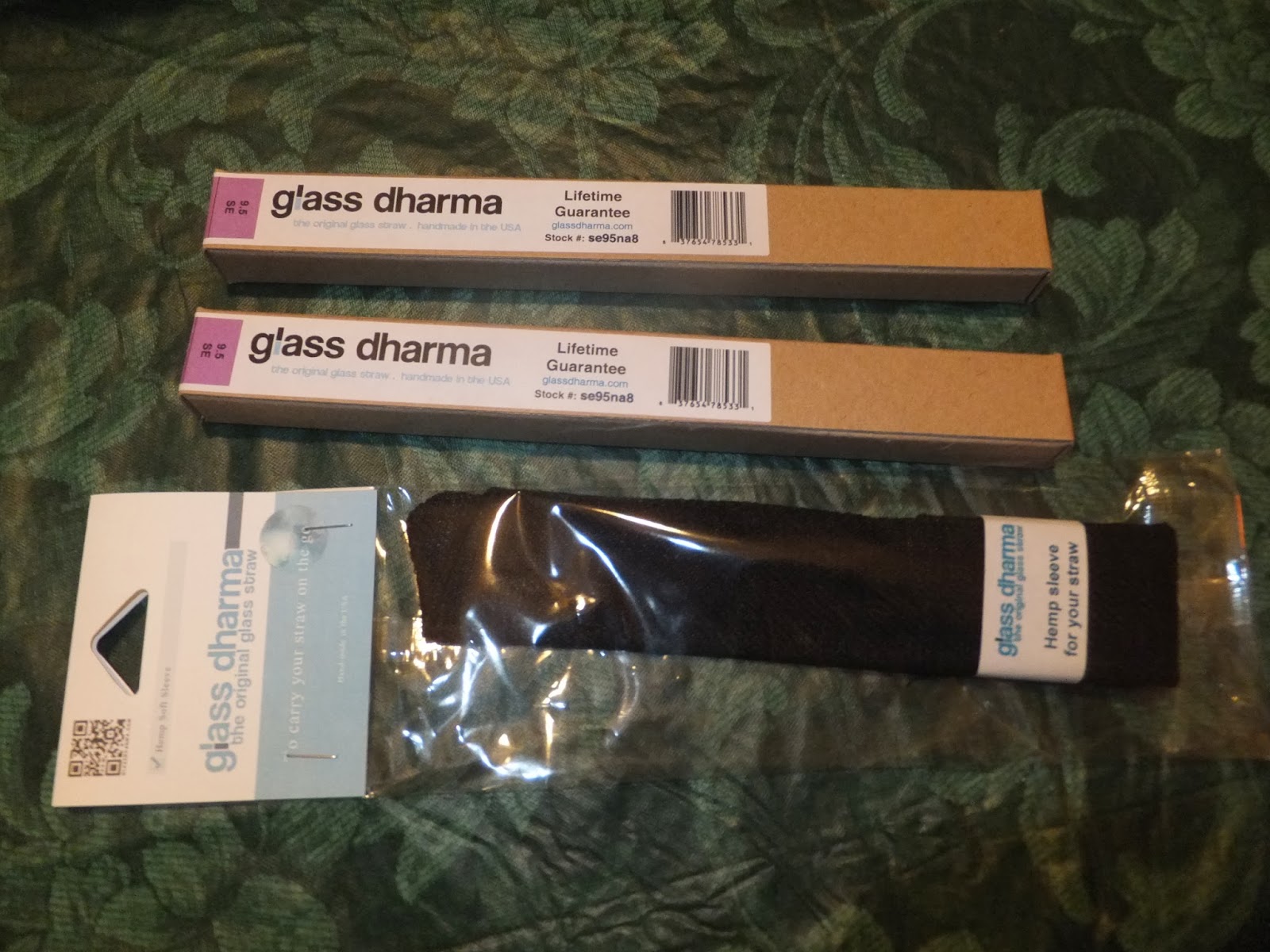 I chose to go with the 9.5"Ice Tea Straws which are very versatile and can be used in most any "to-go" cups at any restaurant be it dine-in or fast food.  They are easily washable and with the carrying case, great and ready to go in my purse at all times. 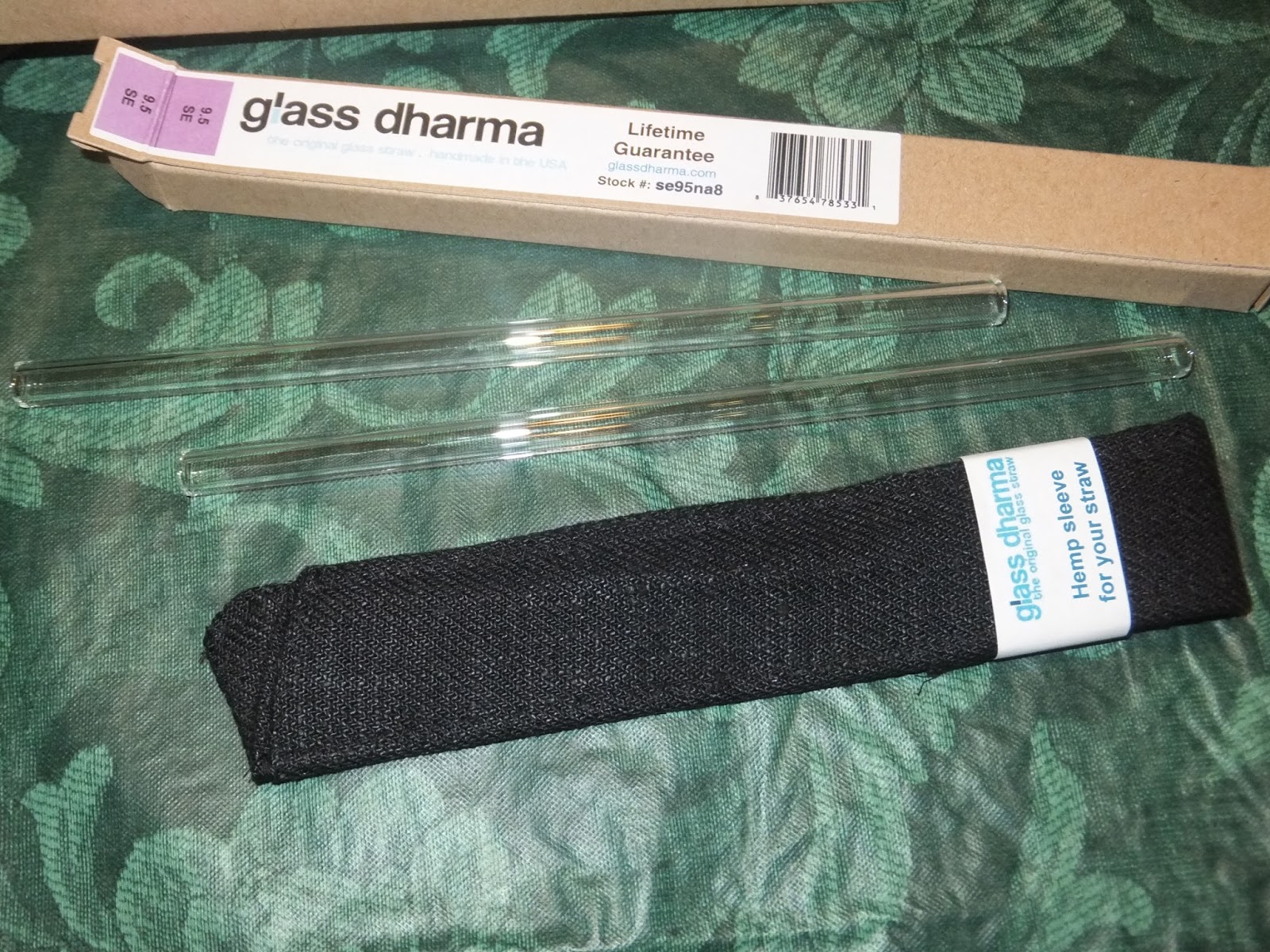 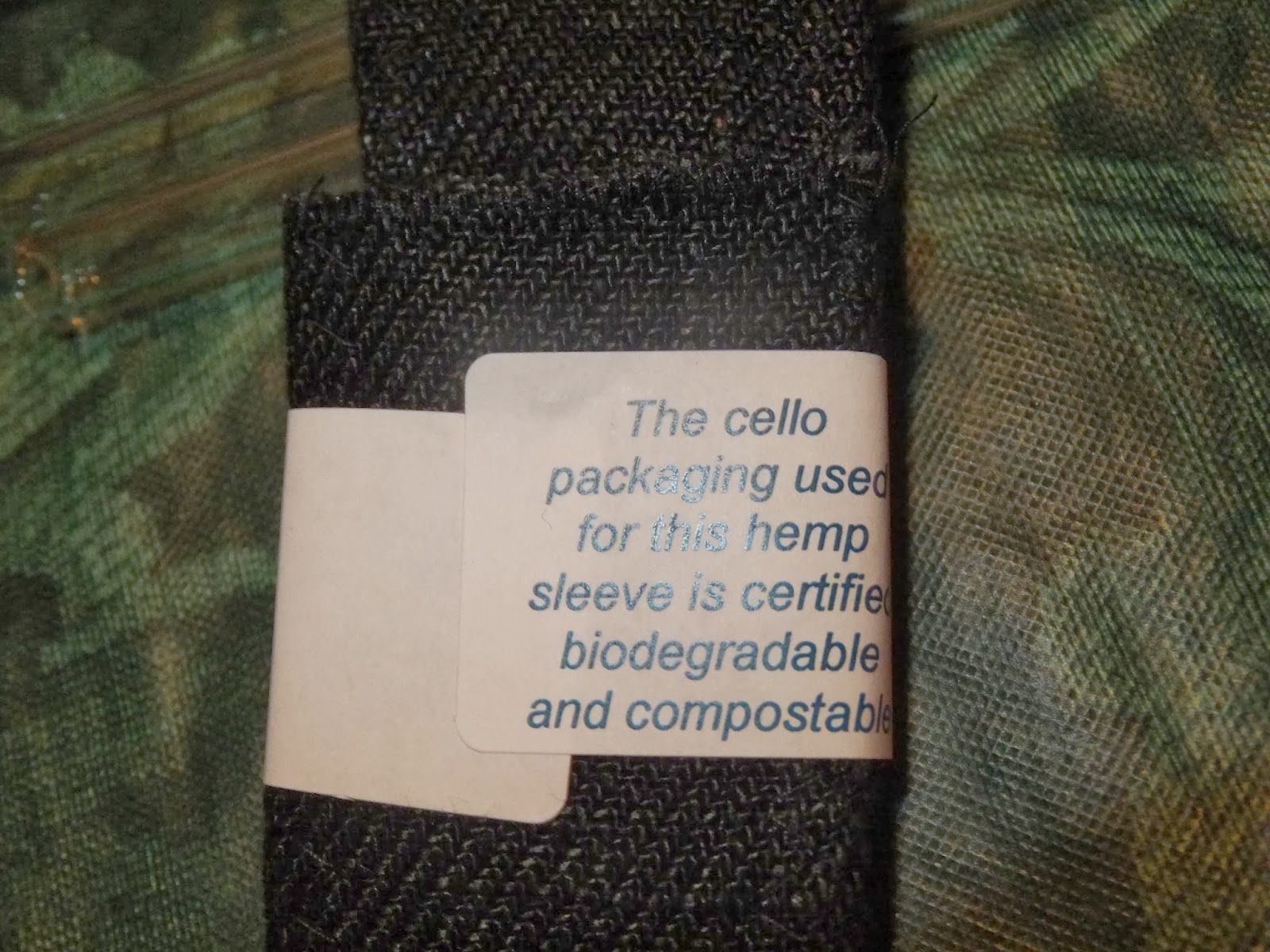 Not only are the straws made in the USA but the carrying cases are also made of hemp which is biodegradable and compostable. What could be more Earth friendly? 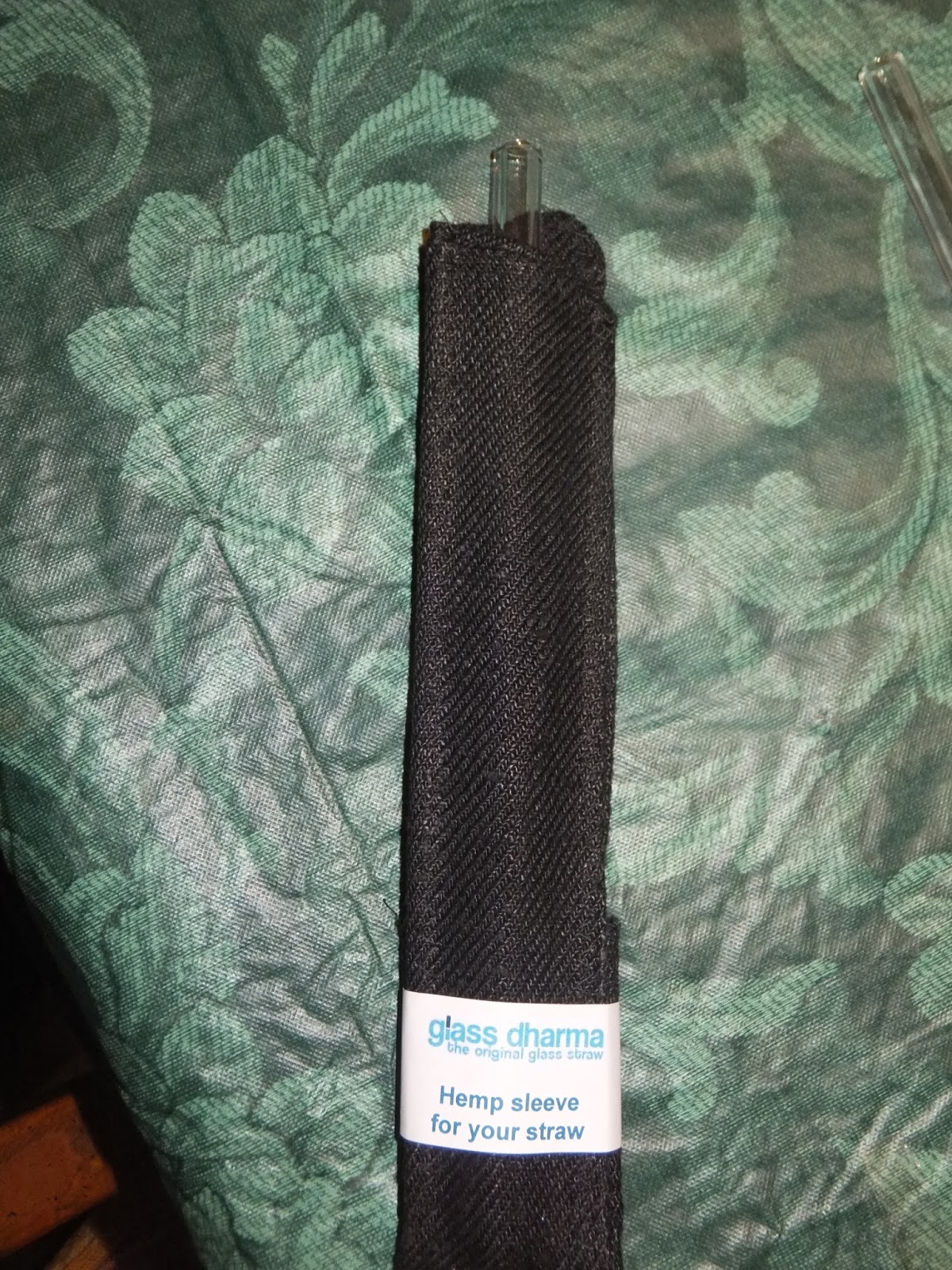 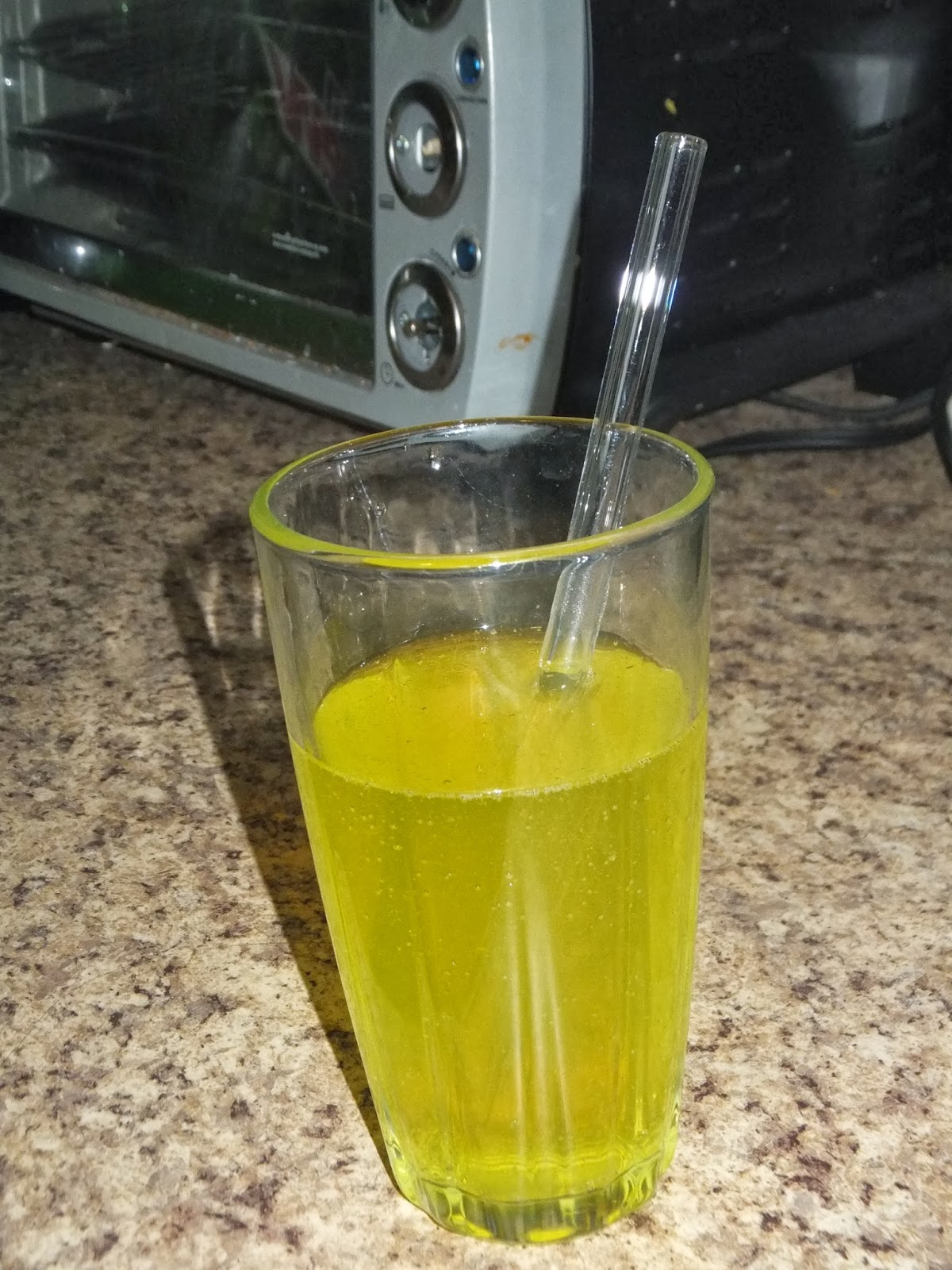 A shot of my new straw in my daily dose of soda. 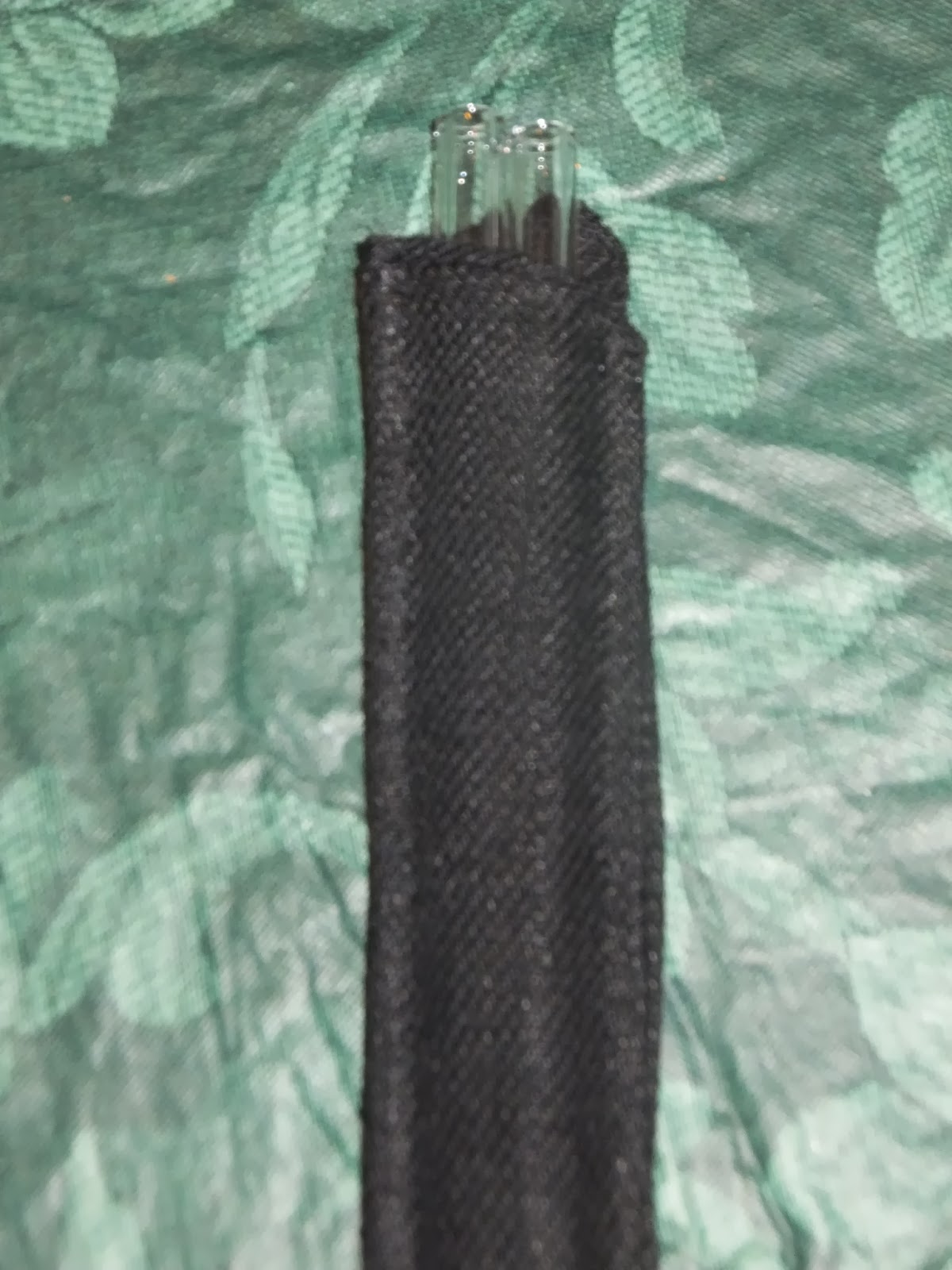 They also offer straws sets for families or friends on the go! 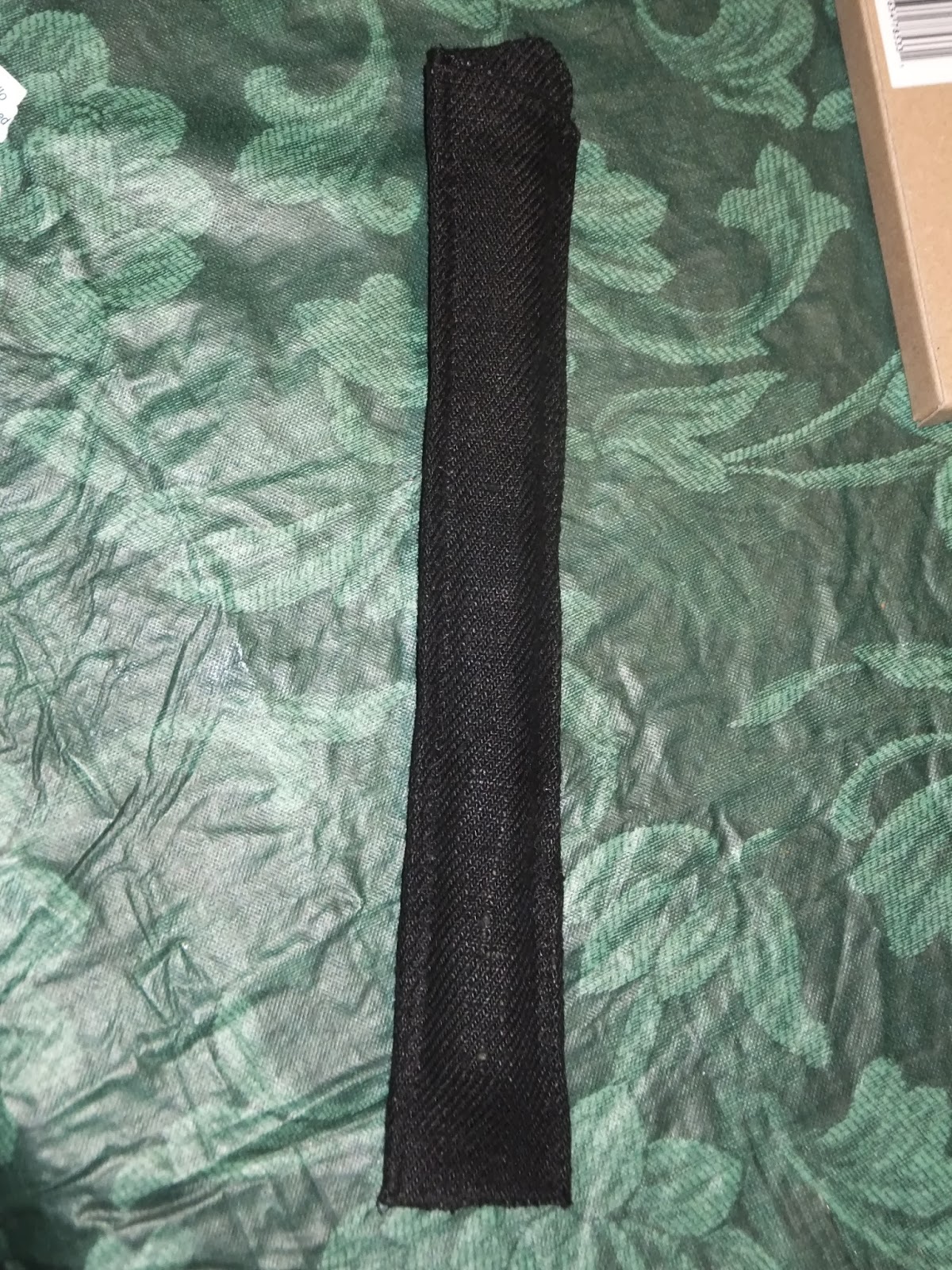 My staw was all safely wrapped and completely wrapped up and ready for the purse.

I highly recommend everyone begin to use Glass Dharma's glass straws. Not only are they inexpensive and a small thing that each person can do to help the environment are fun, easy and gorgeous!

Besides them offering the sets with carrying cases for families  they also have beautiful straws with colored "dots" so when you have friends over, everyone easily knows whose drink is who's!  How much fun is that?  You no longer have to write your name on a cup or bottle with a sharpie.

You can find lots of facts on their site about how plastic is one of the most polluting things in our environment but also about how plastic straws are always on of the top 10 collected items cleaned off our beaches each year.  "as of March 2008, McDonald’s serves an average of 52 million meals PER DAY!" I'm sure that statistic is much higher now 6 years later.  And, that's only one restaurant chain.  Imagine what the total could be?

You can help by simply using a Glass Dharma straw.  It's elegant, beautiful, easy to clean and carry and will most likely be asked in public about it.  Together we can make one small thing like a reusable straw change the world.  Or, you could also help out by simply purchasing a gift certificate for someone you know who may love a Glass Dharma straw but not sure which one to choose.

So, Glass Dharma is such a generous company and cares so much for the Earth, in honor of Earth Day 2014 they are allowing me to give away at $25 gift code to get any products you wish on their site. Simply leave a comment on stating which straw you prefer and why. You will be a believer from the first sip. Promise!  Also, any possible restaurant owners out there please consider using Glass Dharma straws in your restaurant versus plastic straws.  It will make a difference.

Please leave your comments below.  If you sign up or have signed up as a blog follower, you can leave an additional comment.  The winner will be chosen on April 1st via random.org.

Thank you and happy sipping!

I would like to extend a HUGE thank you to Bent for designing the new gorgeous new top banner for my blog site!  Many thanks Bent! It's perfect and more than I could have hoped for!

I'm sure I was a pain to work with due to my constant requests for changes. However, he continued to work with me until I had the banner that I loved and felt was perfect for my blog; including the little mini-dachshund.

Bent is also helping to revamp our mini-dachshund banner and site.  I've been incredibly impressed by his design skills and customer service.

He's been designing graphics since college and has been drawing/creating art since he was very young.
He will soon have a website up which will showcase all his design work, hopefully including the work he has done for my blog as well as our http://www.footlongdogs.com site.

As soon as I have that one uploaded I will post a new post and link to our upgraded page so you can all more of his great talent and how much I appreciate his work on helping me to get a more professional banner on the blog as well as more attention to his great attention to detail.

I would sincerely recommend him to anyone and everyone who needs any graphic work done on their blogs, websites or business sites.  He has been more than gracious to work with and very patient with me and my requests.

Thanks again!  I absolutely love my new banner!

I was fortunate enough to accompany my mom who also was gracious enough to spring for my airfare as well as buy me a TON of new clothes for our trip to HOLLYWOOD!  That's right, (for you all who don't live in Hollywood) going to Beverly Hills and staying in the tallest (that's right, THE TALLEST) building and penthouse in the city was incredible!  When you're staying on a street named "Avenue of the Stars" makes you feel like Alice in Wonderland.


We drove to Charlotte and spent a few hours in very crappy hotel (with a big name behind it) and we were up an ready at 4am for our 6:45 flight before our layover in Atlanta then on to LAX.  After that, we were picked up and taken to the greatest place to stay in Beverly Hills. 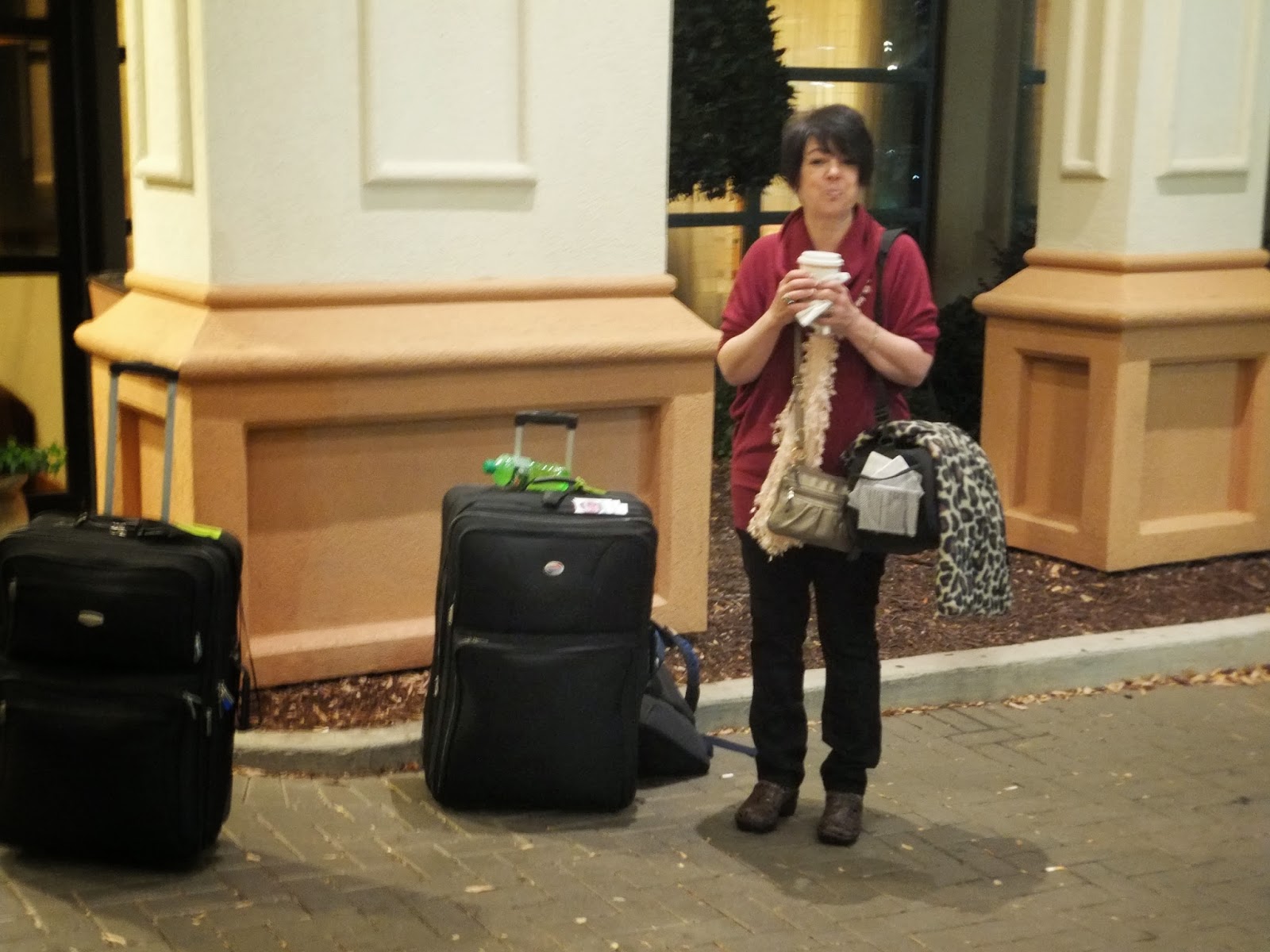 Mom with her EARLY morning coffee awaiting the shuttle to the airport. 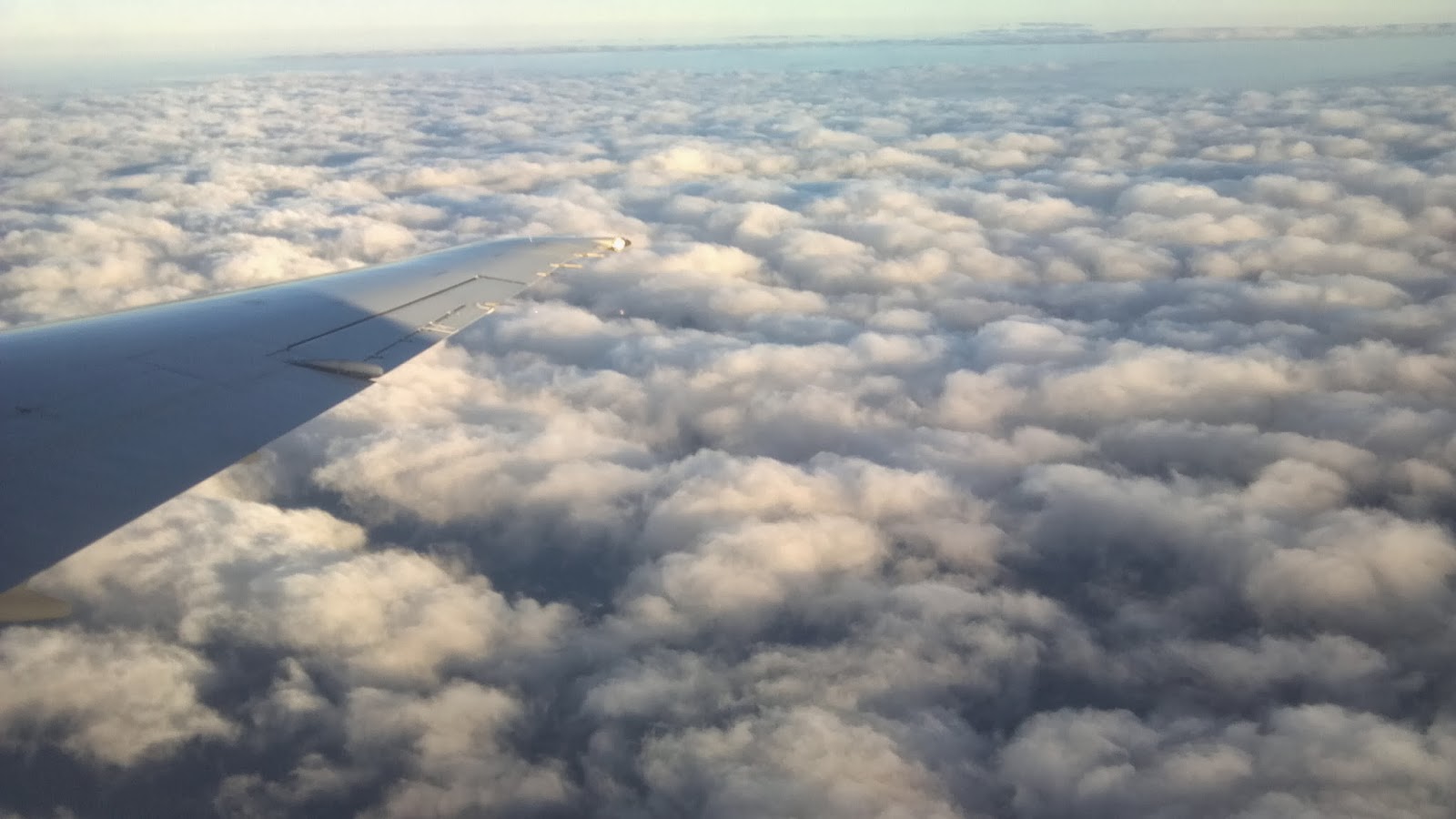 The view from Charlotte to Atlanta.

It's the home to one famous and wonderful celebrity ever! We were fortunate enough to be allowed to stay for 5 days in a the condo which belonged to a friend of hers which was out of town. It was the most amazing trip EVER! 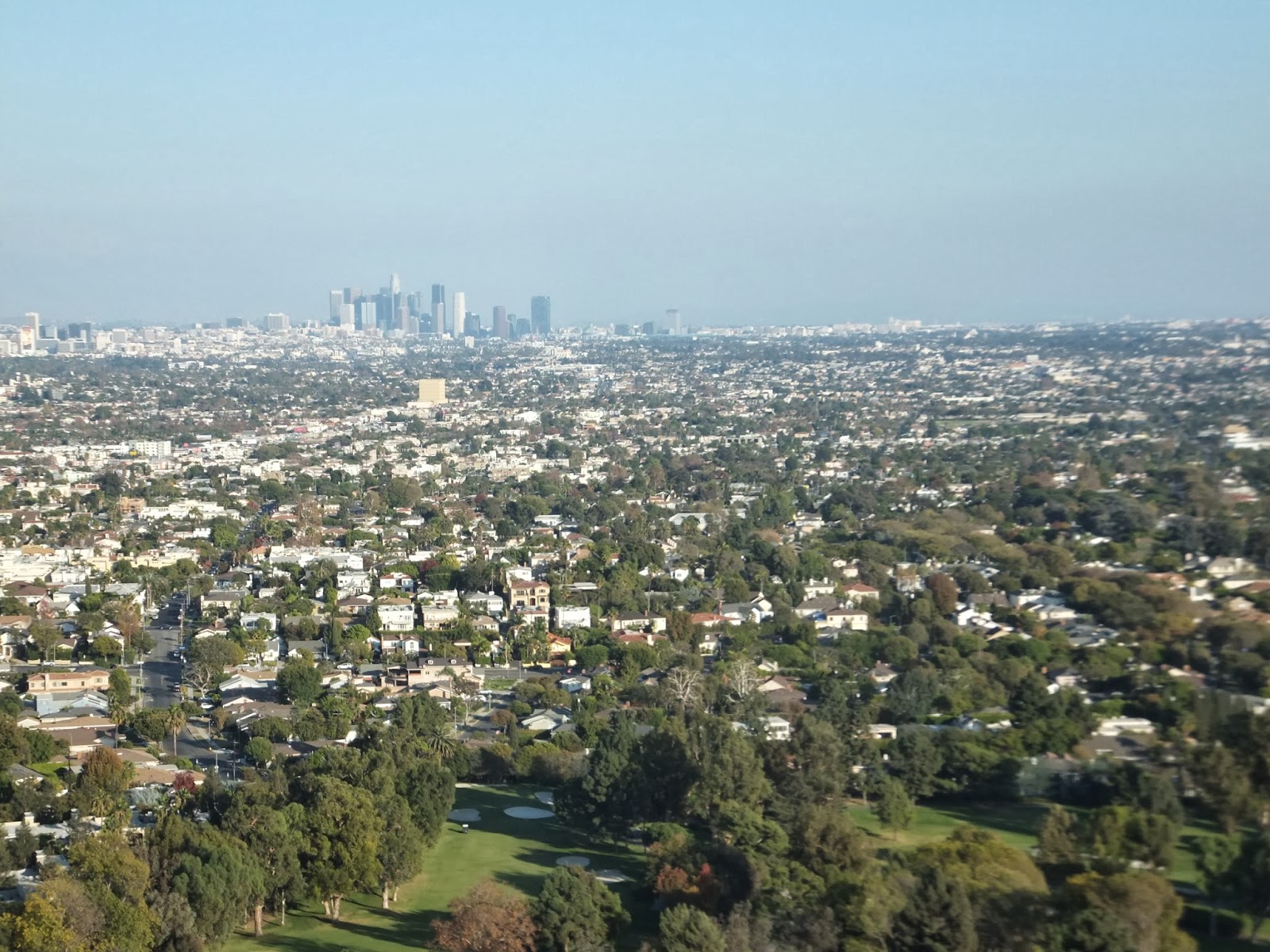 The view of downtown LA from the condo 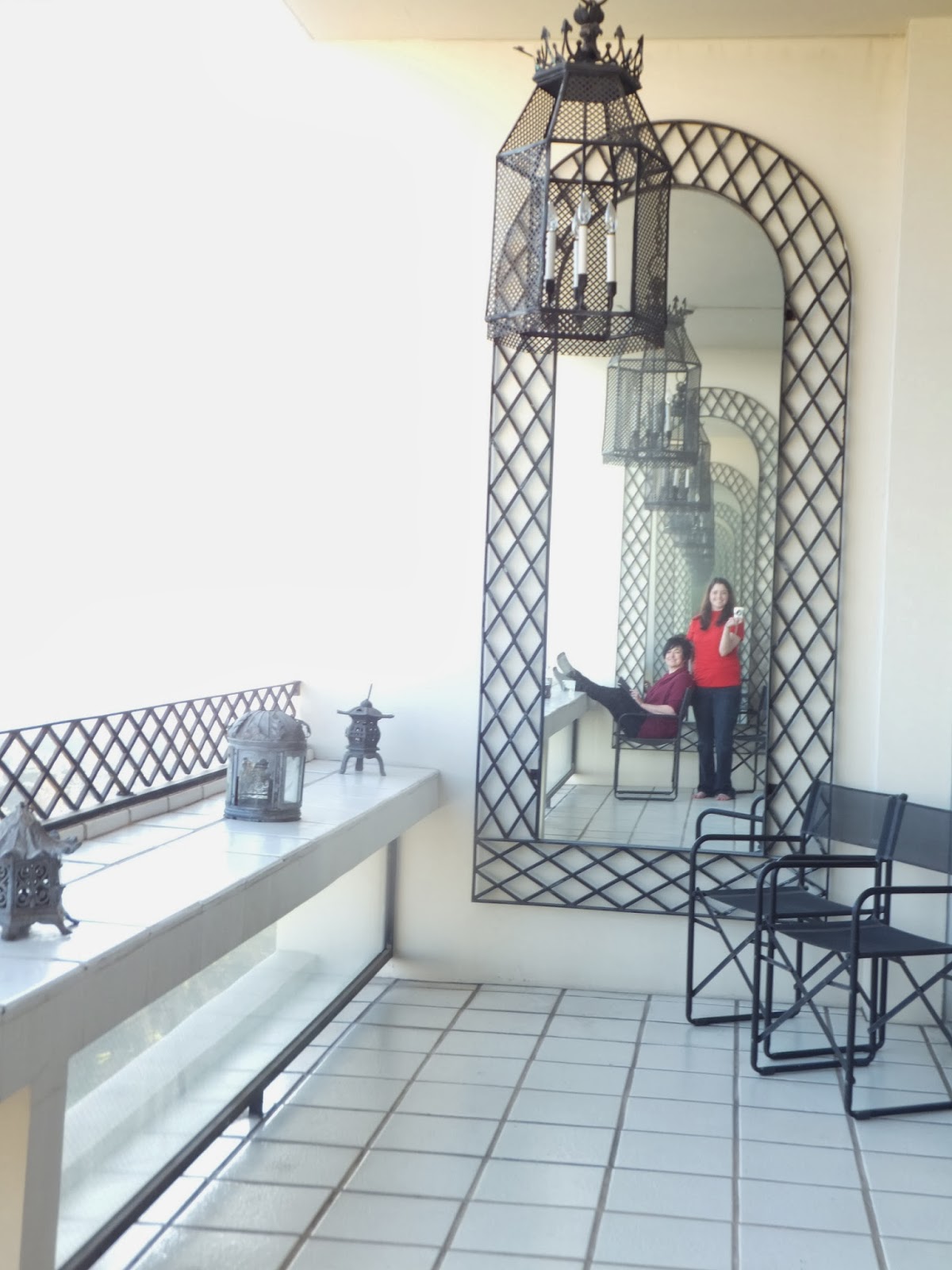 Mom and I after arrival chillin' on the front patio. 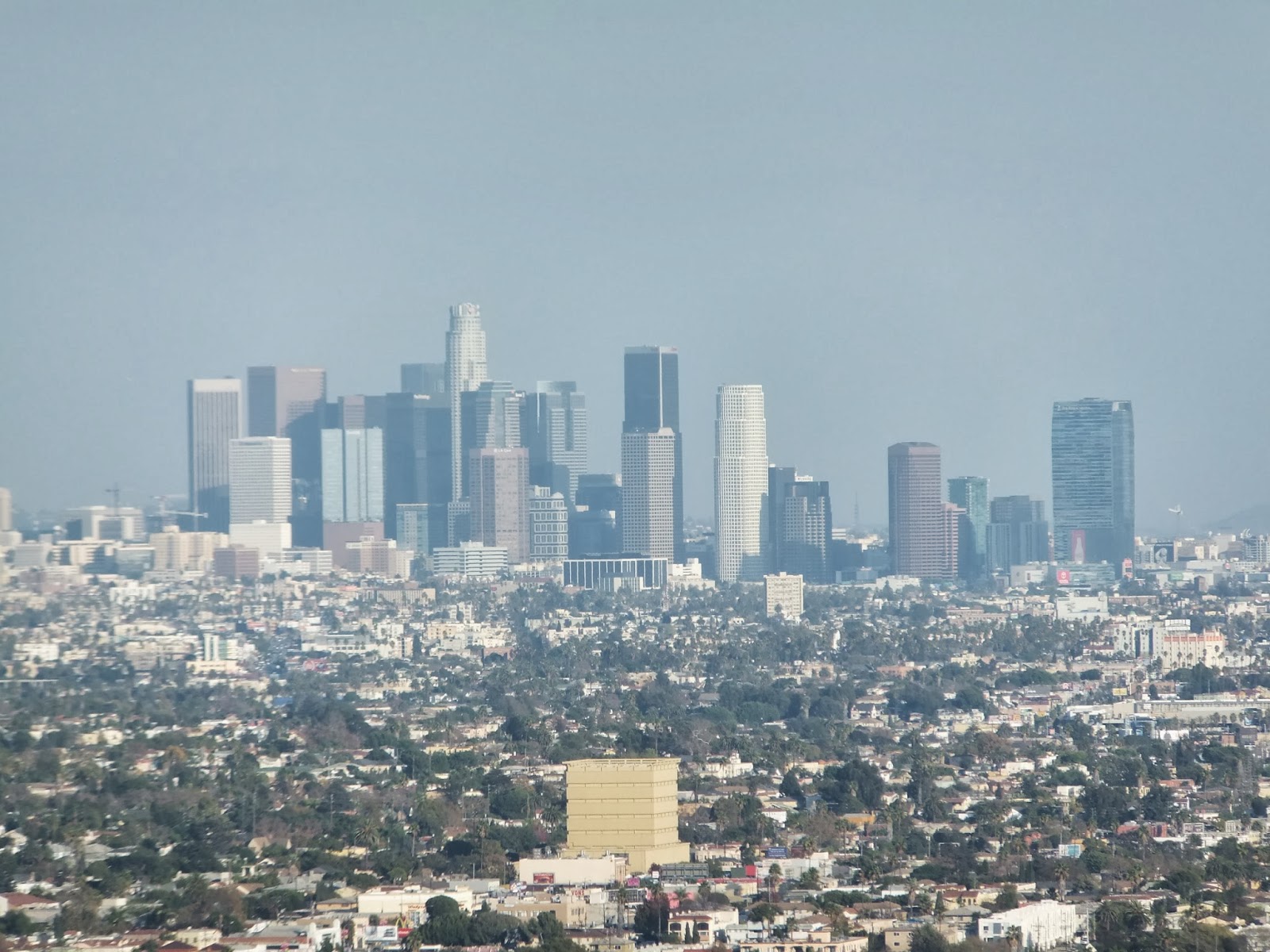 Zoomed in pic of downtown LA from the patio


I had never flown before and it was quite a long voyage from NC to CA.  Well worth it to say the least.  I'd often heard that CA folk are like northerners (no offense to either, I've found both to be false).  In fact, I found it to be the opposite (on both accounts).  Folks in these areas simply speak less but, were just as friendly and helpful to us or even more so.

We were able to do all the touristy stuff in L.A. including visit the famous Walk of Fame where I was almost stabbed by "Chucky", vistit the Santa Monica Pier, the Hollywood Sign (which was visible from the condo itself) and also go to Rodeo Drive.  I felt like Pretty Woman, only... not so pretty (or a hooker). But, after a visit to "Tiffany & Co" and leaving with my first piece of jewelry from there, a charm bracelet, I felt over the moon. 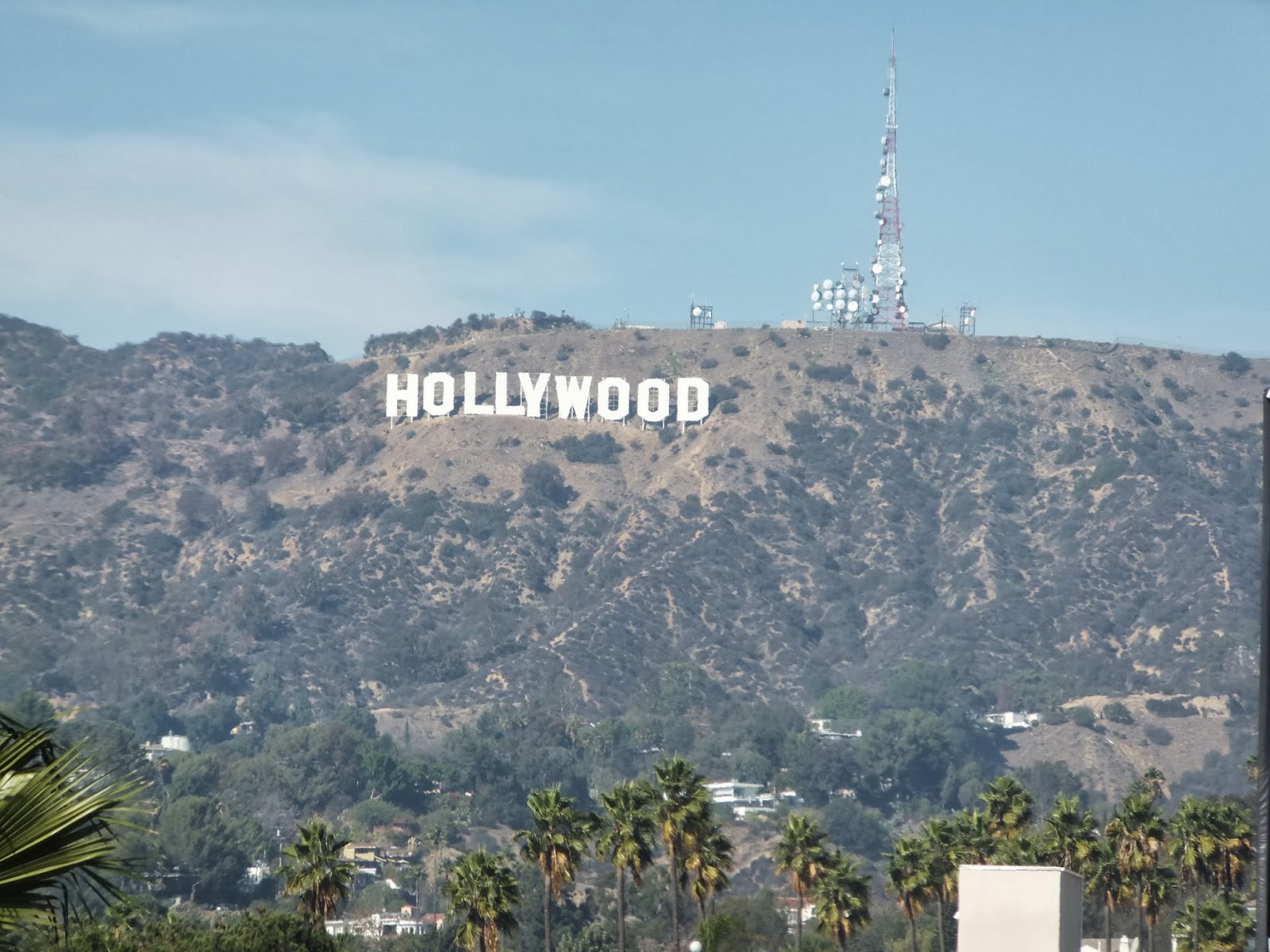 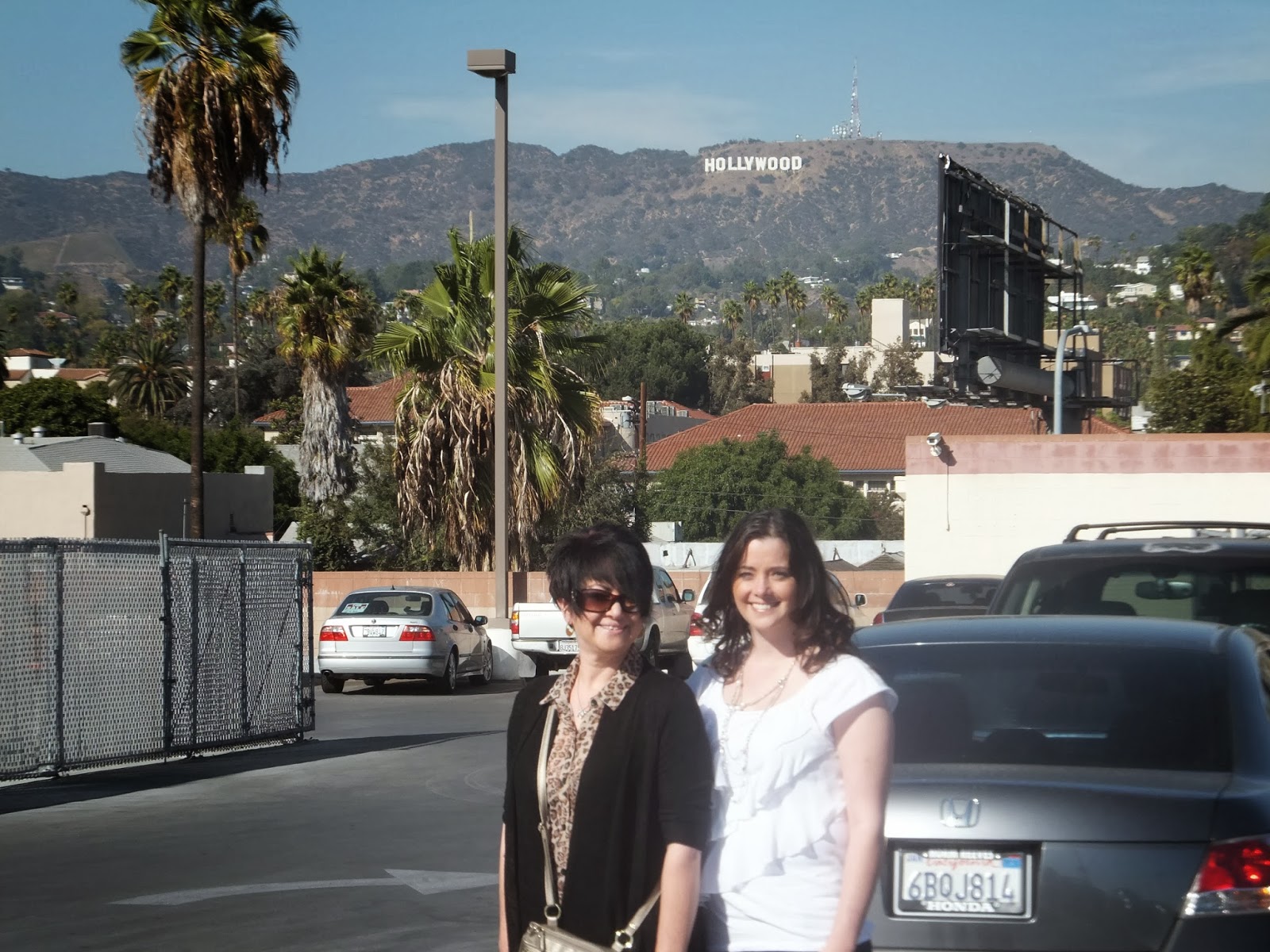 Mom and I posing in front of "the sign" 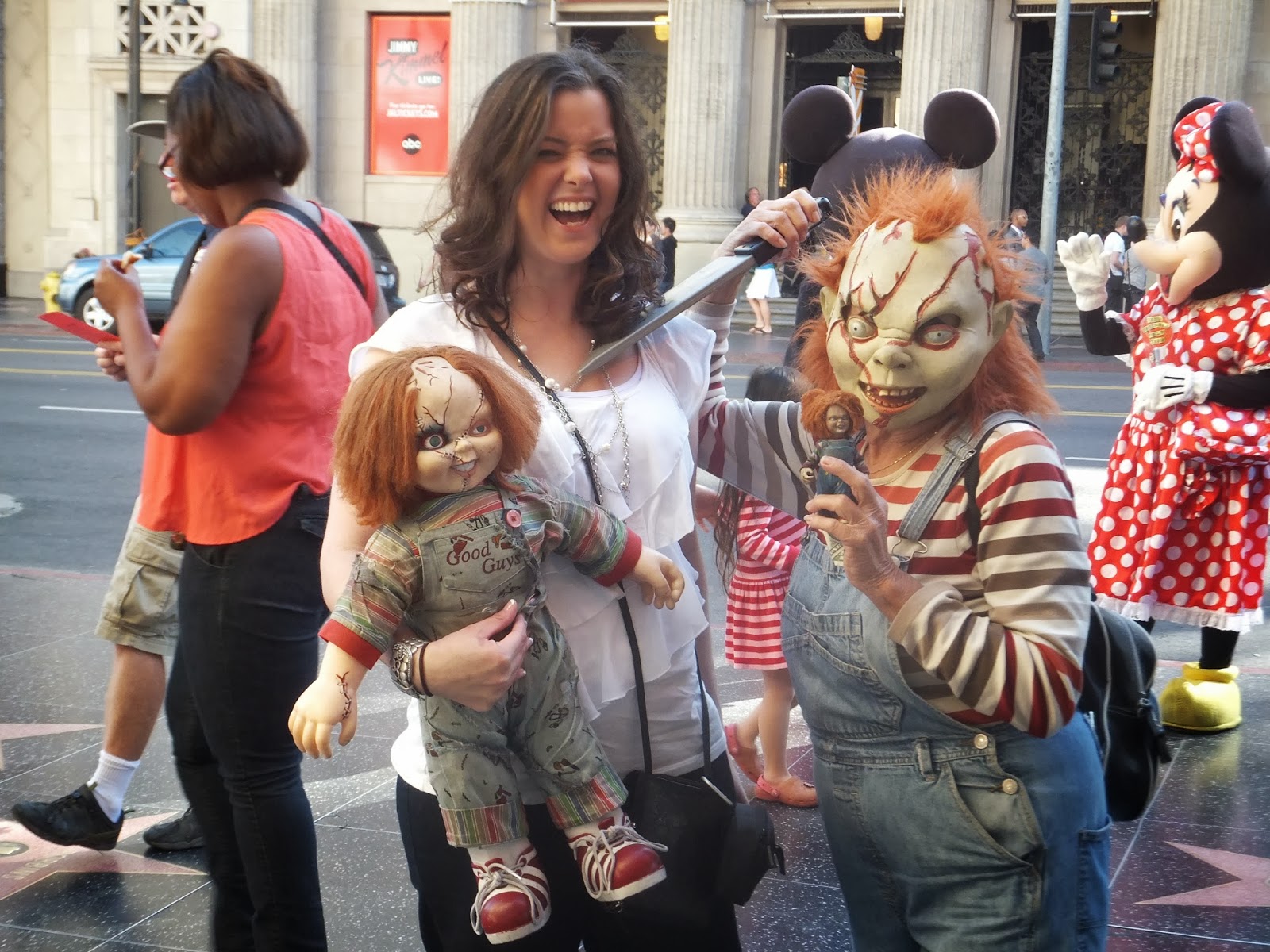 Chucky attacking me violently on the "Walk of Fame"
I didn't call 911, just gave him a few bucks and he went on to the next victim. 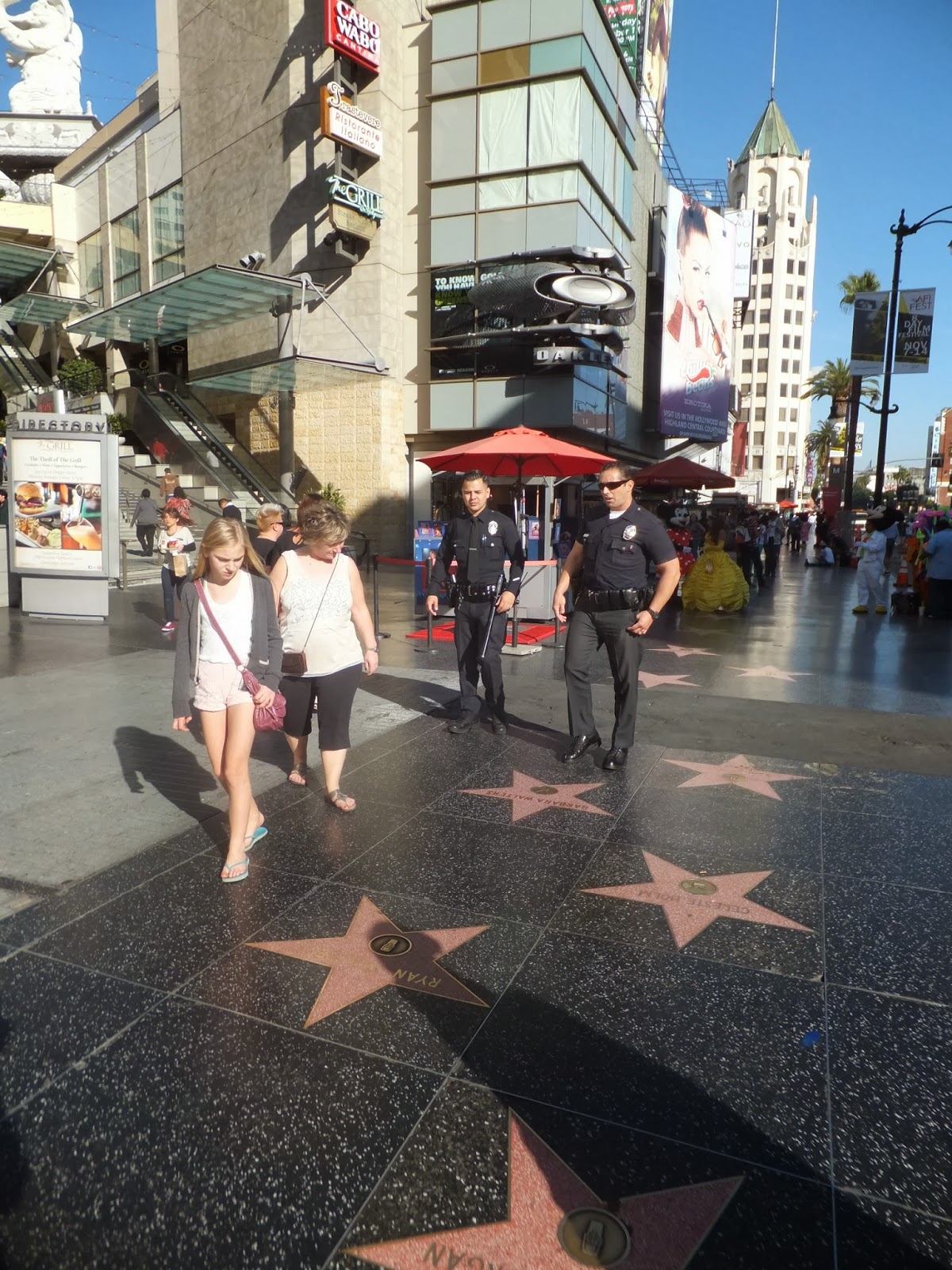 Walk of Fame with LA cops keeping up crime 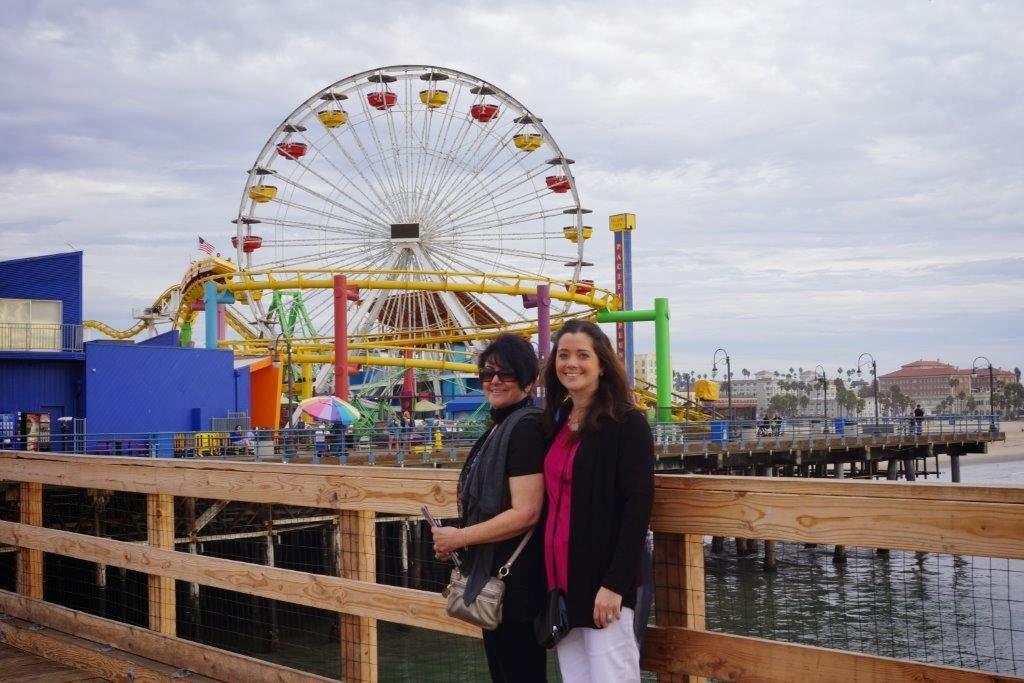 The Santa Monica Pier..luckily a quiet day there 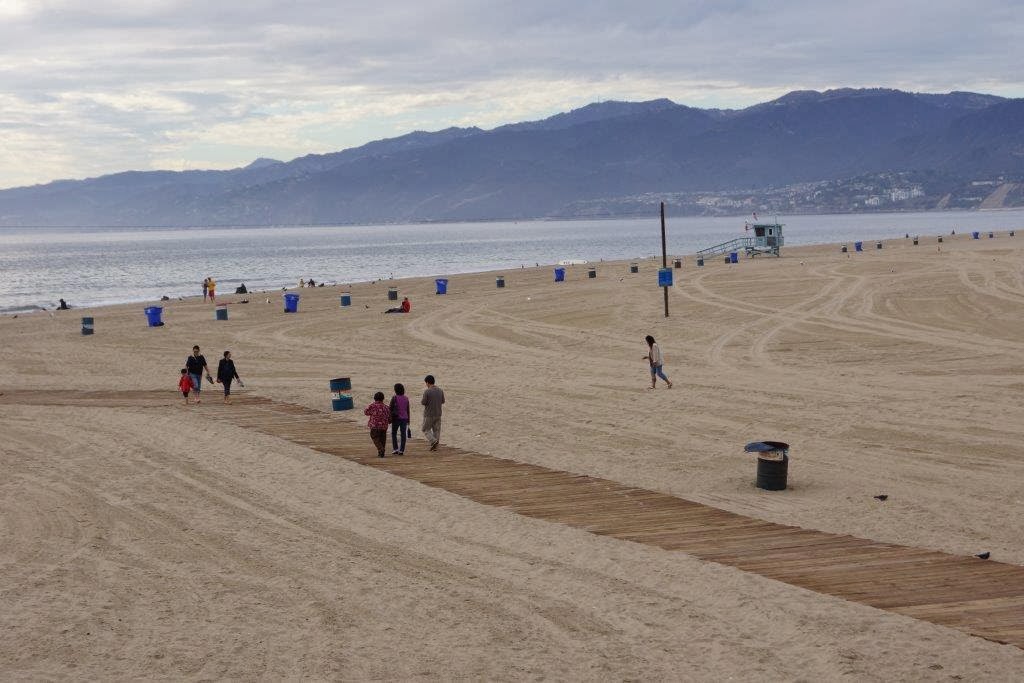 The Boardwalk down to the Pacific from the Pier

I also go the opportunity see awesome cars whose owners lived in the condo in which we laid our heads after long days as tourists in the City of Angels.  Everything from Lamborghini's to Rolls Royce and even a '29 Ford that was completely made of wood, even the wheels! 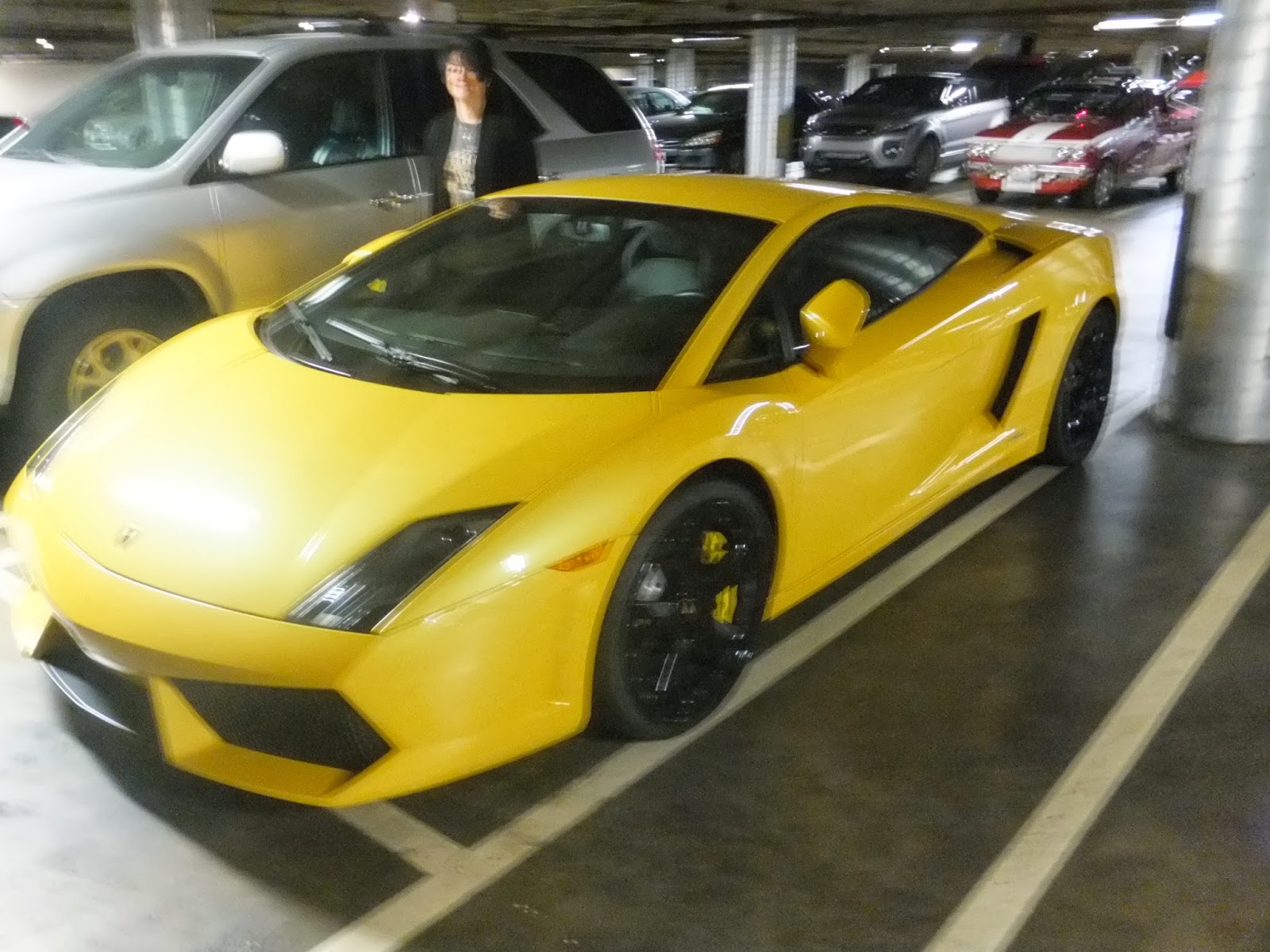 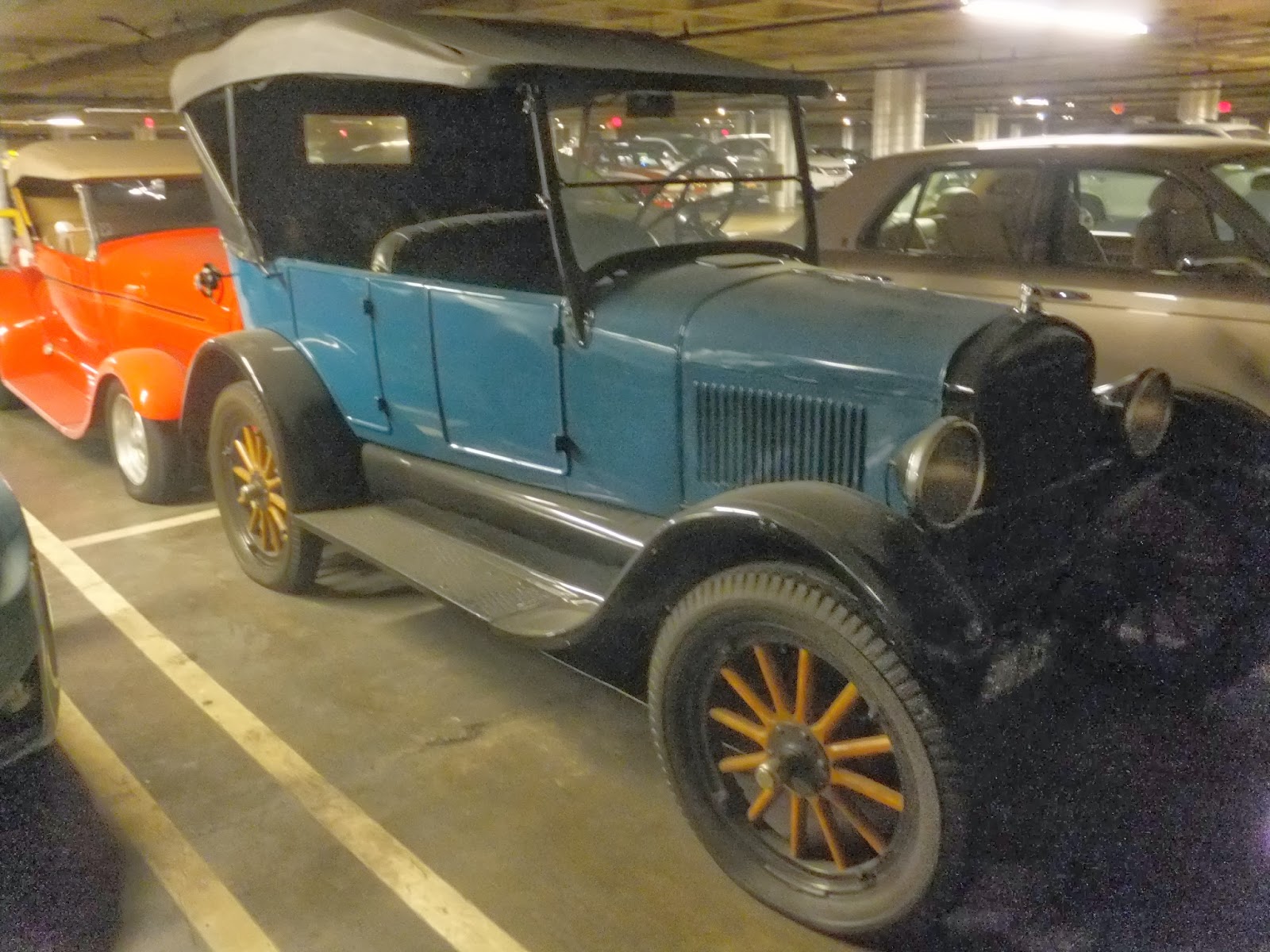 29' Ford made completely of wood.  Probably first and last
of these I'll ever lay eyes on.


It was such an incredible adventure and I'm so happy I got to share this incredible experience with my mom.  It was so much fun and sooo much to do and see.  Not to mention my first, second, third, fourth and fifth plane rides...it was indescribable.  We both had terrible jet-lag and took a week or more to get back on EST but more than well worth it.  I'd go back in a heartbeat and it was one trip that I will never forget.  Thanks to all those who made it possible. I never knew I had family in CA but, from now on, I know I do. :D